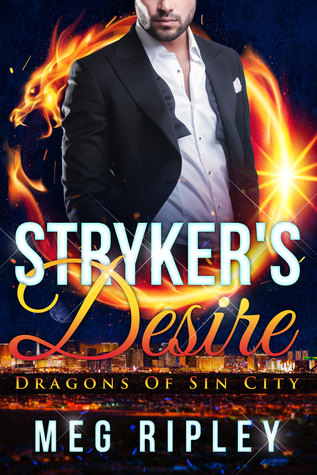 The sight of her curves makes my mouth water. The fire deep inside me threatens to rage out of control. But every time I try to claim what’s mine, she slips away.

As one of the wealthiest casino owners in Vegas, there’s no doubt I could have any woman wrapped around my finger in a heartbeat. Until I met Ava Winter.

There’s something haunting behind those enchanting eyes that I just can’t read–and this mysterious beauty won’t let me.

As much as she pushes me away, I can’t resist her. But I know I shouldn’t allow myself to give in to the fiery temptation. Not if I want to keep her safe from the other dragons in Sin City.

Titles in The Dragons of Sin City series include:  Stryker’s Desire –

I have to be frank and say that while I enjoyed many aspects of Stryker’s Desire by the ending of Hope and Cade’s story I had just as many unanswered questions as I did on the first page.  And that’s not really a feeling I want after finishing a basically good story.  The only answer that makes sense is that somehow we are not completely finished with this couple’s story.  Perhaps the unanswered questions that I have are part of the plot for a story further on in this series.

Yet, despite my feeling of needing something more from Stryker’s Desire – I do believe this is a romance that any reader of Paranormal Romance or Shifter Romance would enjoy.  Cade has quite a few mysteries surrounding him, and it seems, several demons of his own to deal with as well.  Hope is in hiding and is really only out in the public in her magician’s assistant persona as Ava Winter.  There hidden behind costumes, contacts and wigs she can get on with the business of earning a living without detection.  That is until the casino owner, Cade, takes a very personal interest in her.  Their chemistry is intense, and the danger to them both shows itself rather quickly.

I believe I need to read the second story in this series to see if it’s something I want to continue with.  I’m intrigued, but also frustrated with the feeling of missing “something” that I can’t pin down.  There is a magical sensation to this story and I hope to see that played out.  And I’m still hopeful for those pesky answers that are bothering me..  So, admittedly, this is not my usual style of review – I liked this book on many levels enough to want to know more.  And I believe that has to be good enough for now.