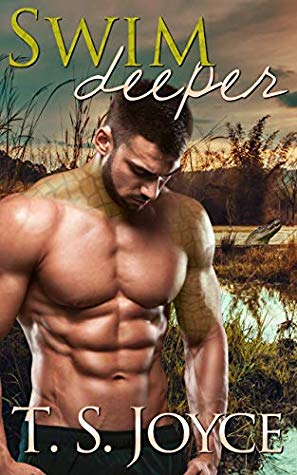 I’ve sat here for about fifteen minutes trying to figure out how to start this review.  It should be easy, and in many ways it is, just dive right in.  But SWIM DEEPER made me think.  I’ve been addicted to the Shifter Worlds of so many talented authors over the years, yet I read mostly about big cats, lions, leopards, tigers, cougars or bears, grizzly, black, brown, polar or wolves of any type, and dragons, lots and lots of dragons — but not reptiles.  And I do not really know why that is.  Perhaps it’s because there aren’t a lot of reptile shifter romances out there, but there are some – I’ve passed them by I thought because I wasn’t familiar with the authors… but now I’m second-guessing myself.  Aren’t shifters simply a human and animal sharing the same space in their existence?  Isn’t it the human romance about them that I crave?  Their animals are entertaining, but it’s the human parts falling in love that attract me – so why not reptile shifter romance?  Let me introduce you to Holt Lachlan, alligator shifter, and maybe you’ll be rethinking your shifter romance choices as well.

SWIM DEEPER begins T. S. Joyce’s newest series, Keepers of the Swamp with a tale that will break your heart before healing it, and the characters, so much better than before.  Shifters are known in the world, yet not a lot is known about them so there is still some fear attached.  Especially in Uncertain, Texas where a legend has grown about the swamps, the Lachlan family, and the alligators in their swamps.  One very private man has advertised for a mate, a human mate, in an underground matchmaking service.  He’s not looking for love, he has very specific rules that cannot be broken, he is looking for someone for his animal to protect, and not to fall in love or raise a family.  What came knocking at his door is not what he expected, and Bre is about to change his life forever just by being her true self.

Bre has spent her career as a television reporter doing fluff pieces, she’s good and she wants so much more.  She’s been offered a story, one that can make her career.  All she has to do is lie, pretend, and betray a man’s trust.  But he’s just an animal, right?  It shouldn’t bother him one little bit but this story will spring her and her crew to the big times.  At least, that was her thinking as she approached Uncertain and Holt.  It didn’t take long to see the man beneath the gruffness, to coax a smile out of the grump, or to begin to see just how wrong what she was sent to do really is.  She has a change of heart, but will it be too little, too late?

I loved everything about SWIM DEEPER.  Holt, Bre, Liam, Holt’s Gram… just everything.  What an amazingly addictive tale this is.  It brings you in slowly but steadily to one man’s reality and one woman’s quest to change not only herself but how a town thinks of one of their own.  Yeah, I’m definitely hooked on another series again with the Keepers of the Swamp, and I’m going to dive into DIG DEEPER just as soon as I get my hands on it.

Not into reptile shifters?  For this one book set aside that thought – I believe you’ll discover a story well worth your time, and maybe find a new series to follow.