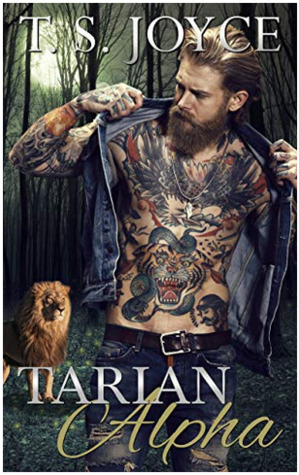 The Tarian Pride is right in the middle of a historical power-shift. Ronin Alder is taking over as the New Tarian Alpha, but the entire Pride of lion shifters needs to be completely rehabilitated. Back in the Pride after years hating it, his job is to push the monsters here to a new future, one where they will stop warring with every shifter Crew in existence. But when he heads up a rescue mission and finds a hurt woman in the woods, he had no choice but to save her…or kidnap her. And when he learns her story and recognizes just who, and what, she is, his entire future as Alpha of the New Tarians takes a new direction. His life had been laid out before him, but now he wants so much more. He wants Emerald.

Emerald Lawson is a descendant of one of the original Tarians, her bloodline highly coveted by the Old Tarian Alpha, Cassius. He’s put her between a rock and a hard place and turned her entire life upside down. She’s accepted her fate on the throne of the Old Tarians until she stumbles upon a man on a mission in the woods. When she’s kidnapped by the New Tarian Alpha, one day with Ronin changes her life forever. How can she go back to living in a cage after he’s set her free? She’s a submissive lioness who doesn’t belong, but Ronin challenges Emerald to be something she’s never been before—fearless. And as a new uprising begins, she will find herself at the helm of a destiny that could change the entire future of the Tarian Pride.

Every time I finish the latest series in the Damon’s Mountains Universe sets of connecting series I think that this world cannot possibly get any better than this… until I start the next new series.  And we are in for a rollercoaster adventure in the New Tarian Pride series.

There is a decidedly different tone to TARIAN ALPHA than we’ve seen before, and that makes perfect sense for this New Tarian Pride is newly created from the breaking up of their former corrupt, power-driven pride — we saw this coming in bits and pieces of the most recent series.  We’ve met Ronin, Rose and her grandson Grim before – and we will encounter more as well.  This is a pride that is growing, building itself under a new Alpha.  They haven’t learned to work together yet, they are still somewhat shattered but things are about to change and one submissive lioness will find her own strength and abilities as she sets off a chain reaction that will change lives forever.

I absolutely loved Emerald.  The changes she goes through in this story shows an amazing woman’s growth into her own power, her own strengths and her own place in this new pride.  Ronin is an Alpha that anyone would be honored to follow, he does not invoke his Alpha power to get his pride to bend to his will – in fact, he often uses himself to protect them without their being aware of it.  His slow building of Emerald’s confidence in herself, his showing her what she could be if she made that choice, his lessons on how to protect herself all show his caring for the woman who should be his mate.  Their’s is a slow burn romance full of outside dangers and defying an old way of life for something new and better.

There is a lot going on beneath the surface in TARIAN ALPHA.  Sadistic power mad bullies, the empowerment of women who have no idea of their own power until they use them, building trust and loyalty through actions and commitment in a brand new pride — and two people discovering exactly what their future can be when they stand together against all odds.

I enjoyed TARIAN ALPHA so much and would not hesitate to recommend it to any Paranormal Romance or Shifter Romance reader.  We’ll meet secondary characters who will have their own tales told later in the series, and watch a pride, a community being born… and run into some old friends at just the right moment.  I loved this one, and if you’ve followed any of the Damon’s Mountains Universe series, then I’m sure you will, too.