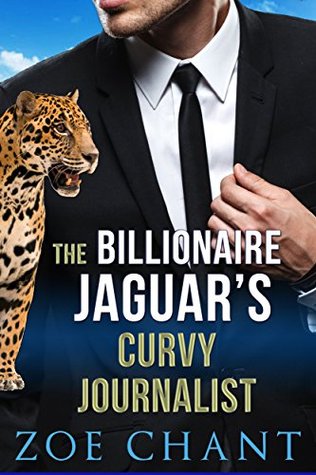 Abby Bailey loves her job at the Salem Beach Now entertainment and society section, but she’s tired of the endless parade of parties. She needs a great story, a chance to prove herself as a journalist…and she gets her chance when handsome newcomer Paul Larson comes up to her at a party. His company’s expanding into Salem Beach, and she might have the inside edge… if she could just stop thinking about his gorgeous eyes and perfect body.

Paul’s mother had always told him he’d know his mate on sight, but he still hadn’t expected the sight of Abby to hit him like a bolt of lightning. She’s beautiful, sexy, and smart. She’s looking for a story, and he can give her an exclusive—but can he persuade her that he’s more than just a headline? And can he get her to accept his jaguar side?

Things heat up when an accident sends Paul running to the rescue—on all fours— and Abby finds out his secret. Will Abby get not only her story, but the love she never knew she was looking for? And can Paul convince her that he’s more than a feature article, but the man with whom she should be spending the rest of her life?

Read on for my thoughts on The Billionaire Jaguar’s Curvy Journalist.

His mother had always said that when his cat and he met their mate it would be like a lightning bolt.  He’d never been sure he really believed in that right up until this amazing woman backed into him.  And he knew.  He wasn’t overly excited to be at this charity event, it was a bi-product of his business to make appearances at these types of things.  But this one had brought him to his mate – now all he had to do was explain the shifter jaguar thing and that she was his and everything would fall into place.  If only it was that easy…

Abby was never thrilled with these charity assignments.  Sure it was fun on some levels to hobnob with the rich folks of Salem Beach, but she was here to cover the event – no hobnobbing for her.  Until that moment when she was so focused on getting the shot that she backed into the most handsome man who just happens to be a most sought after CEO of one powerful company.  He seemed so… normal.  Oh, the elusive billionaire Paul Larson was far from normal or in her league at all… but some harmless flirting came naturally.  When she is offered an exclusive interview the very next day. Abby knew that she had the man’s attention – what she didn’t know was that he was about to change her world, forever.

Not only is The Billionaire Jaguar’s Curvy Journalist a fun sexy shifter romance, there are at least two threads of underlying stories that aren’t mentioned in the Cover Description.  🙂

A suspenseful danger to both Abby and Paul – and the discovery of a thought lost loved one that holds out the hope for a connecting story in the future.  No, I don’t think I’m going to go into any more detail.  Simply know that this story is more than a lighthearted Shifter Romance – but one you’re going to have to pick up to find out more.

If you love Shifter Romance you cannot go wrong with a Zoe Chant story.  This one offers a solid story, great characters, lots of sizzling, sexy times and a few mysteries.  Enjoy.