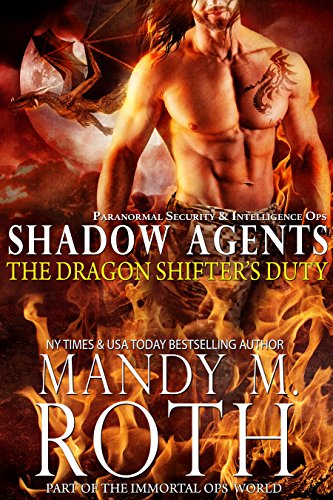 Ezra has become a familiar face in many of the stories within other series in the Immortal Ops World.  Now, in The Dragon Shifter’s Duty, the second title in the Shadow Agents series we finally get his complicated story… and it was well worth the wait.

Ezra is an ancient dragon shifter… a truly, really ancient who has spent his long life without his mate at his side.  Yet.  There was that time, oh, twenty-some years ago when he was drawn to help a young girl in the middle of a mission, a tiny girl who withstood fire, scolded him for littering and called her lizard-man rescuer Newt.  She was never far from his thoughts as once he got her to safety he had to continue on to his mission losing track of her for years.  They found each other again years later… and Ezra being male did a stupid thing and once again lost track of the now woman he suspects may be his mate.

Holland and Ezra are about to meet once more in explosive situations – and they can either save each other and get on with their lives together, or Ezra can mess up again… it’s a toss-up for a while there.

Holland is grown now, an investigative journalist with her sights on a huge trafficking story that’s taken her to the Middle East with a group of bodyguards who are far more than meets the eye, along with one uncanny dog who has a soft spot for Holland.  Over the years she’s tried to track down Newt again but after the way that he left her last time she’s not sure why she cares anyway.  But right now the story is everything… and that’s about to get dangerous beyond what she or her bodyguards expected.

The Dragon Shifter’s Duty is full of danger and intrigue, yet it’s also full of banter, sass, laugh out loud moments, and definitely steamy.  I love a strong heroine, and Holland is that and more… and she can certainly stand up to her mate with no trouble whatsoever.  A few well-loved faces appear again, we add some new names to the mix of this world, and some very vile villains round out the characters of this story, one I enjoyed so much that I was tempted to start it all over again before moving on to the next one.

Available in audio and for your favorite e-reader.