The Enforcers: Israel by Anastasia Wilde 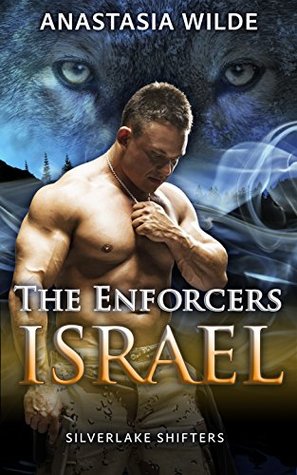 Now that his best friend, his brother in everything but blood has found his mate, in fact it seems like his entire pack has found their mates, Israel is feeling the longing for his own mate.  His wolf looks at practically every woman they walk past with longing and then dismissing with a “not the one” thought to Israel.  He wants what his friends have and he knows that she’s out there somewhere – he simply didn’t expect her to be the exact opposite of what he thought would be his ideal mate.  What he had considered an easy case of being a bodyguard for a diva of a country singer who is perhaps a victim of a stalker – turns into a life changing event.  His mate.  But nothing about convincing her that she’s the one is going to be easy.  Not one single thing.  Between her own actions, the escalating stalker and what appears to be a domineering family in the background pulling strings – well, Israel is going to need to find some patience and fight some battles.  But when his mate is finally at his side, it will be all worth it.

Ashley has fought hard to live this dream.  Her music is everything to her, and she’s gone up against her family to go after what she wants.  Her family is controlling, archaic and not afraid to use whatever weapons they need to keep her safe, or in to keep her in line – up to and including magic.  Her animal has been bound, she is unable to shift even to save her own life – that is the price she pays in order to follow her dream.  She cannot afford to feel the way she does about her sexy, at times annoying new bodyguard.  Israel is beyond what she can allow herself to want, but that doesn’t stop the wishing.  When absolutely everything around her goes into the danger zone the only one who will risk their life for her is her mate.  And she will defy her family to be with him – if they should survive.

The Enforcers: Israel is a powerful, tense romance that will keep you flipping pages.  Ashley and Israel are a unique couple, and their journey has some serious roadblocks to overcome.  Of course, this is a smokin’ hot read – but beyond that it’s also a mystery on several levels, one that has interesting twists and turns along the way.  This series continues to grow in intensity and once again we encounter an iconic shifter who will change Israel’s life in ways he never expected.  I would definitely recommend this story and this series to any reader who enjoys Paranormal Romance or Shifter Romances, even Mystery lovers will find a plot to enjoy in this one.