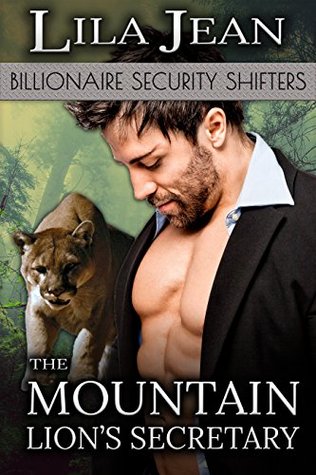 Lila Jean is a new to me author.  So when I saw The Mountain Lion’s Secretary on Amazon my thought was… hmmmm.  Okay, let’s try it.  Here’s a bit of inside information – I’ve read far more (or at least attempted) Shifter Romances than have ever appeared here at Shifter Haven.  Why?  Because quite frankly some just sucked.  If I wanted nothing more than porn – I know where I can find it.  Ya know what I’m saying?  So I always approach a story by a new to me author with a bit of a chip on my shoulder – I admit, it’s not nice but it is true – I’m saying in my head… prove it to me that this is a story with sex – not nothing but sex, with no story involved.  Well, there is definitely a story here in The Mountain Lion’s Secretary plus the beginning of an interesting series – yes they do have sex, and lots of it.  And yes, there is a story, a believable story – well, for the shifter world that is.  *grin*

So maybe Ryker finally managed to catch Zane off-guard or at the very least surprise him into an angry response.  While his boss might be bellowing at him, Ryker – his friend knew that the woman he’d hired as Zane’s secretary was perfect for the big boss… in so many different ways.  Now he just had to convince Zane to give Mara a chance then sit back and hope for magic to happen.  But at the volume of Zane’s response to the fact that he now had someone to help him run his office, Ryker wasn’t completely certain that his little matchmaking bid was going to work.  After all, if Zane fired her before she even showed up there was no hope for her as a mate.  And Zane needed his mate, he simply didn’t realize it yet.

In fact, Mara was in the outer office listening to the shouting match going on behind closed doors.  At the mention of her name, she couldn’t stop herself from leaning an ear to the office door to listen more closely – although by that time there were angry mutterings that couldn’t be heard.  Blast it!  She needed this job, she would not be fired before she even met her boss.  She decided on a bold move.  Knocking on the office door, acting as if she hadn’t heard the loud argument within, she bluffed her way through the first meeting with her boss.

Being blindsided twice in one morning was not the norm for Zane.  But this beauty managed to do just that.  His mate.  How in the world had Ryker known she could be the one.  It didn’t matter, she was here now and he had to convince her that staying at his side for the rest of their lives was the best move she could ever make.

The Mountain Lion’s Secretary is the beginning story in what is proving to be a very interesting series.  We’re going to meet up with a mountain lion, a grizzly bear, a black bear, a wolf and even a dragon.. perhaps even more than that.  Talk about diverse!.  Zane owns and runs a security business that hires Shifters.  In this world Shifters are known, if not totally trusted by everyone.  All that power is off putting to some people.  He’s driven by a powerful event in his and his family’s past that should have been taken care of long ago.  But like bad pennies, trouble will always find it’s way back into some lives.  Discovering Mara is his mate was the best thing that ever happened to Zane.  Keeping her safe is now his number one priority – and when a danger from his past rears it’s ugly head he might not be able to keep that vow.

I enjoyed this one and I believe you would, too.  I’ll be diving into the next story in the coming days.  So far, this is the only series I’ve found by the author.  I guess we’ll see what the future holds.  I recently visited her website and she has a very interesting series planned.  I’ll be checking that one out.  Never be afraid to try a new to you author, you’ll never know when a great story will be delivered by someone you’ve just discovered.