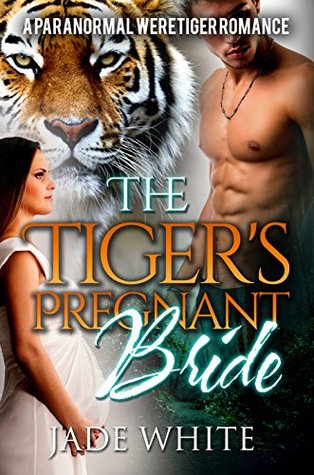 Olivia was definitely not looking for anything serious when it came to men and sex. That was why she enjoyed seeing Sable, her “friend-with-benefits”. The fact he was a sexy shapeshifting WereTiger just made it even more fun.

However, the fun ended when, despite being safe, Olivia found that Sable had made her pregnant and under WereTiger law this meant only one thing.

They would have to marry and raise the child together or she will face execution.

Reluctant to marry at such a young age, will Sable save Olivia’s life by making her his bride? Or is she going to be forced to go on the run in order to protect her unborn baby?

Shifter mates are very sexual and rarely hesitate to physically show their mate how much they love them – as a result this is an 18+ reader tale.

Read on for my thoughts on The Tiger’s Pregnant Bride.

One of the things I love about the Paranormal Romance sub-genre of Shifters is the vast diversity of worlds, politics, mysteries and how each story’s world is somewhat unique.  We are presented with just such a unique world in The Tiger’s Pregnant Bride, one where the rules are archaic and make no logical sense… unless politics are involved.

Sable is one very handsome, sexy and wealthy Tiger Shifter.  He has no interest in settling down and goes about his life as he chooses – his only concession to real life comes from his taking parental responsibility in the raising of his younger brother, Egan, after the death of their parents.  Olivia and Sable have been friends for years, friends, sometime lovers they both are comfortable in their roles in each other’s lives.  One Human, One Shifter but the differences between have never mattered.  Until everything changes…

In Olivia and Sable’s world the line between Human and Shifter is very clearly drawn.  There are to be no Human/Shifter romances and should a Human ever become pregnant, she must be vetted by the Council, deemed approved and the couple must marry immediately… or the woman faces death.

Sable has been having dreams, prophetic dreams and he now believes that Olivia is his fated mate.  Which is perfectly fine with him since he has loved her and enjoyed her company for years.  When it becomes apparent that Olivia is pregnant, Sable is delighted and resigned to Olivia’s strong willed determination to not follow the rules.  She has no intention of getting married.  Period.  The rules regarding Human and Shifter pregnancies are archaic and outrageous, and she will not follow meekly along with them.  In reality, Olivia loves Sable and is happy to be having his child – on many levels she’d delight in settling down with her mate – but her need for freedom outweighs common sense and sets the stage for an adventure she never expected to take.

Olivia’s decision will thrust she and Sable into a fight for their lives – and political upheaval that will tear apart Human and Shifter relations from that day onward.

The story is action packed, fast paced with an edge that holds you captive until the next shoe falls.  There are twists and turns – and a very believable story.  There are secrets, lies and murder – there is an extremely loving and sensuous couple and their battle for survival of not only them, but their family, friends and community is gripping.  I would not hesitate to recommend The  Tiger’s Pregnant Bride to any lover of the Paranormal and Shifters in particular.  Egan’s story continues in Running With The Tiger… where we’ll get his story as well a different glimpses of what was happening on other fronts during this chaos.