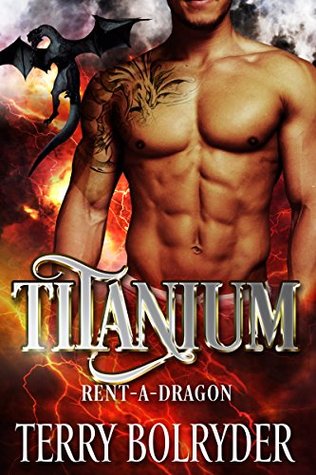 Unless you’re the woman Titus Kroll just fell madly in love with. As a decisive, capable, and newly awakened metal dragon, Titus is used to seeing what he wants and going after it. Right now that’s Bree Durell, a sweet, curvy woman who needs help with her house badly and can’t afford to pay. Still, his heart says she’s his mate, and no matter the price, he’s ready to serve her every need, whether that’s repairing her home, healing her heart, or restoring her trust.

Bree Durell isn’t looking for romance. She has enough on her plate with a crazed stalker, a clumsy but adorable dog, and a house that’s falling apart around her and too expensive to repair. Though there is instant attraction when she sees Titus in all his tall, blue-eyed, muscular glory at Rent-A-Dragon, she’s sure she can’t afford his fee. So when Titus shows up on her doorstep with an offer she can’t refuse, she vows she will only keep things professional, no matter how wickedly talented he might be with his hands.

As Titus and Bree work in close quarters, sharing a home and a few steamy encounters, there are big threats circling. From an ancient friend-turned-enemy, to rogue dragons obsessed with vengeance, Titus is going to have his hands full if he wants to protect his newly-built life.

I’ve enjoyed the Metal Dragons of the Rent-A-Dragon series.  They’ve been entertaining, more down-to-earth in their acceptance of their unique situation overall.  If I had to pick a favorite one, I believe it would be Titus’ story.  He’s been in the background, a true friend, a bit grumpy at times but also eager for his chance to get out in the world and find his mate.  He will have the unique experience of truly understanding the need to go slowly with his mate, more likely to give her time than the others were… yet, too much time without the truth between them could be disastrous, in many ways.

Bree is completely relationship shy, and with her background that is completely understandable.  When you’ve been raised with an emotionally and verbally abusive father, then fight off an attempt into a forced relationship by a controlling, stalker-like jerk – well, you tend to be overly cautious about stepping back into those situations.  And a dragon will always want to protect his mate, which some might see as the ultimate control effort.  Their relationship may be rocky at times, but Titus will do anything in his power to keep Bree safe, even if that means not telling her the entire truth about himself right away.

As Titanium is the final story in the Rent-A-Dragon series we’ll get a bit more information about the viewpoint of the precious metal, noble dragons who have been out for mischief since the first story.  We’ll also see more of the results of the villain of this series’ shenanigans.  On a bit of a side note, I’ve loved the inclusion of a pet dog in each of these stories.  Knowing the loyalty, devotion and love of my own Sheltie it’s been fun seeing their parts in these stories.

I believe anyone who has read this series has a pretty good idea of where we’re going next – and I’m certainly looking forward to that journey.  If you love the mystery of dragon shifters, enjoy a unique loving couple, and can laugh at the silliness of some characters then you’d love Rent-A-Dragon and Titanium as well.  I’d recommend this story and series to any Paranormal Romance or Shifter Romance reader.