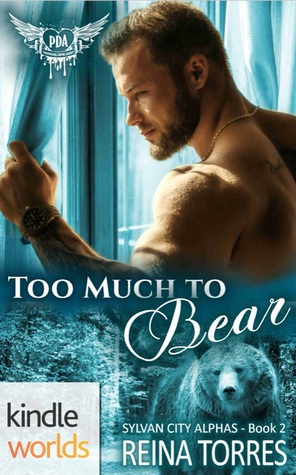 I had such fun with Too Much To Bear.  After the intensity of the first story in the series, Boone and Willa’s story is lighthearted, fun and definitely sexy.  Although I suppose this story “could” be read on its own, there are characters mentioned and events that really began back in the first book, The Tiger’s Innocent Bride.  So I’d suggest you pick that one up as well, it will enhance your enjoyment of this story… and besides, it’s an amazing story as well.

Since the cover blurb tells so much of the background for Willa and Boone you don’t need my recap.  The love that Willa has to give is overflowing.  She’s always wanted a family of her own and while she may not have given birth to these teenagers, she couldn’t love them more.  Boone found everything he needed in Willa.  She not only completes him but she’s that final piece that binds them and the boys into a family.  Boone and Willa will always find room for one more child who needs them and that is a huge part of their charm.  The endless compassion and love.

We got a chance to catch up briefly with Paige, and spent some time with Cage who will have his story told next.  I’m hooked on this series and enjoying every moment spent in this unique world.  I’d recommend Too Much To Bear for any Paranormal Romance or Shifter Romance reader who enjoys a fun, sexy story with touches of danger and compassion.  Don’t be surprised if you get hooked on this series, it’s addicting.

For The Heart of an Outlaw by T. S. Joyce

For The Heart of an Outlaw by T. S. Joyce