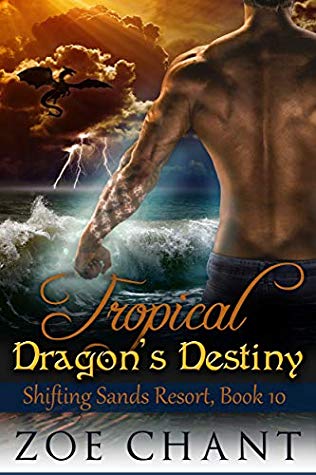 TROPICAL DRAGON’S DESTINY brings us to the conclusion of the Shifting Sands Resort series.  This is such a bittersweet review to write – and truthfully, I won’t be saying a lot for this is one story that you definitely need to be reading for yourself.  Don’t let the reviews tell you this story go read it firsthand.  You will not be disappointed.  Also, if this is your first look at the Shifting Sands Resort series – go back and pick up the very first book and, if you can, read them all for, without that background, understanding of the marvelous cast of characters and what they’ve gone through this story will not have the same impact.  In my opinion, at least.

This series has been simply amazing, and TROPICAL DRAGON’S DESTINY answers all of our questions, even ones we didn’t know enough to ask in the first place.  Scarlet has been fighting Mal for so long about the island.  Now, with everyone on the island from the previous books, she’s going to reveal her true form and a power that no one ever saw coming in order to fight the true danger to her island.

There were moments of pure joy, definitely some tears, tense moments flipping quickly through the pages to see what comes next, and always the deep abiding love and respect that all of the cast has for their mates, each other as friends, and for Scarlet who has been their pillar of strength no matter what else happened.  I’m not going to give anything away.  Simply, I have loved this series, perhaps more than any other by Zoe Chant and I’m sad to see it come to such a satisfying end – but read on beyond the words “The End” to see what may soon be coming our way.  To this particular “Zoe Chant” I have to say thank you for the adventure, the laughs, the tears, and even the anger – it’s been such an amazing ride.

I read Tropical Dragon’s Destiny through my Kindle Unlimited subscription.