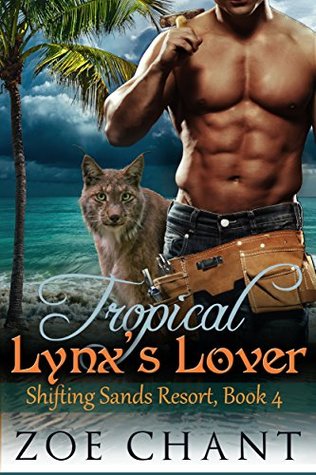 He’s a handyman lynx shifter who can fix almost anything…

Except for his mate’s shattered soul.

Even a tropical paradise has its problems. When something is broken, native Alaskan lynx shifter Travis is always the man for the job. As the handyman in charge of maintaining the beautiful all-shifter resort of Shifting Sands, he’s never found anything he can’t put back together… until he meets his one true mate.

New to being a shifter, curvy black Jenny Smith isn’t used to having an otter in her head, or all of the inappropriate ideas it has. She can’t control her shifting, and she can’t even remember how to read, let alone return to her life as a lawyer. She finds herself randomly with whiskers, and wanting to wash her food in saltwater, and now there’s a gorgeous man her otter says is her fated mate. But does saying yes to Travis mean losing what’s left of her human self?

Shifting Sands Resort is a safe haven for shifters of all types, but a storm is coming, and with it, grave danger from Jenny’s past. Can Travis rescue his mate and show her how to love her whole self… and himself as well?

In Tropical Bartender Bear we met Laura, now in Tropical Lynx’s Lover we meet her twin sister, Jenny.  It’s one thing to help save the day, it’s completely another to discover you did that as an otter… yeah, a mischievous, snarky otter.  Jenny is still reeling from discovering her shifter half, especially since she’s having trouble being able to fully shift into either human or otter form.  She’s frustrated, scared and just a bit still upset with her sister… now her pesky otter is telling her that their mate is here.  No, no, that’s just too much to take in.  Jenny can barely remember how to function let alone have a handsome as sin, sexy mate running around.

Travis is the resort’s fixer, he is quite magical with repairs and building – but fixing his mate, that might be even beyond his skills.  At first finding his mate leads to confusion, then once one thing is cleared up his mate seems to reject him outright.  To say Travis is shell shocked would be an understatement.  But he’s not giving up.  And neither are the bad guys and everyone discovers that not only a hurricane is bearing down on them but the bad guys have made landfall, too.

I adored Tropical Lynx’s Lover.  It’s sexy, cute, with a touch of danger, lots of laughs and definitely some sexy moments.  Tex and Laura plus many of the other shifters of the Shifting Sands Resort series also make appearances once again – I love a full cast of characters who always show up for the good stuff and to fight the bad guys.  I had fun with this one and I believe you would as well.  I’d happily recommend this story and the entire series to any Paranormal Romance or Shifter Romance reader who loves a solid story, likable main characters, lively secondary characters, a bit of danger and all the sexy times you crave.

Flight of the White Wolf by Terry Spear

Flight of the White Wolf by Terry Spear