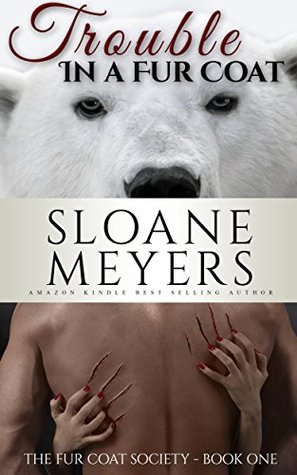 In the year 2055, one group of humanity still lives in the shadows…

Everyone thinks that grizzly shifter Silver Rowe is living the dream. And why wouldn’t they? She’s dating one of Chicago’s wealthiest, handsomest young bachelors, and her life moves at the speed of light. She splits her days between dancing as a star ballerina, and rubbing shoulders with the city’s elite at charity balls. But her charmed existence comes to a screeching halt when she overhears some of her wealthy friends discussing a plan to kill off the ones she loves most…

Polar Bear shifter Jack Tanner is done with clan life, thank you very much. The world is moving forward at a breakneck speed, and he doesn’t intend to let the old-school rules and regulations of the elders hold him back. After leaving behind the wilds of Alaska to become a doctor at an elite Chicago hospital, he’s perfectly happy blending in with the full humans surrounding him. Perfectly happy, that is, until he finds himself falling in love with fellow shifter Silver Rowe—who is newly single and more beautiful than ever in his eyes. But just as things start to heat up between Jack and Silver, their shifter past comes back to haunt them and leaves Silver fighting for her life.

To save Silver, Jack will have to lay down his pride and call on the strength of the clans back home. Can he get their help before it’s too late? Find out, in this steamy, action-packed bear shifter romance!

I have always loved series that connect, even in the slightest way.  Since I most likely enjoyed the earlier stories, then it’s a given that I would enjoy something connected to couples that I know and love.  The Fur Coat Society series is a slightly future time frame involving the cubs and kids of several of the couples from Sloane Meyers’ Ice Bear Shifters – Fire Bear Shifters – Water Bear Shifters – Air Bear Shifters series that connect in some fashion.  The main couple in Trouble In A Fur Coat are Silver who is Anderson and Lexi’s daughter from Grizzly Flying Free (Air Bear Shifters), and her brother Bash (Sebastian), and Jack who is Alexis and James’ son from Bearing The Frostbite (Ice Bear Shifters).  When an author can give me consistently great stories, and they all have a connection in some way – I’m a happy reader for life.

So, enough background – let’s move on to Trouble In A Fur Coat.

Silver has taken her natural talent and love for dance, combined it with lessons from her former ballerina, step-mother Lexi and created an amazing dance career for herself.  Now the main ballerina for the Chicago Ballet, Silver has realized her dreams.  Add to that she is dating and falling for a man whose parents are the elite cream of Chicago society.  If she finds his mother a bit odd and his father a bit of a power monger – oh well, she’s more interested in the son.  Everything is going well in Silver’s life – until the evening of a dinner party at her boyfriend’s parent’s fortress.  While escaping for a few moments into the library, Silver overhears the father making outrageous plans with another person – plans that involve wiping shifters from the face of the earth.

Silver quickly leaves the party, and perhaps foolishly tells her boyfriend what she overheard.  Of course he doesn’t believe in the existence of shifters or that she heard the conversation correctly.  So she will make a call for an emergency meeting of the Fur Coat Society – young, professionals who are  shifters who have settled in Chicago with out clan, friends who have created their own group for support and companionship.  Once hearing her news, some will want to contact “the parents”, elders of their clans who have lived through other attempts on wiping out shifters.  Others prefer to leave the elders out of it, they’d only take over again and this is their fight.  Youth never seems to understand the meaning of “clan” as a group that has your back no matter what – and the decision is made to not involve anyone else in this problem that may not be as bad as it seems.

Jack is one who wants the elders to stay far away from Chicago.  Now a doctor with a position he enjoys there is no way he’s going to risk his life to the interference of those older members of the clan who see trouble behind every rock and impose outdated rules on everyone under their power.  That attitude will unfortunately come back to bite him on the butt.

Silver and Jack are beginning to realize they have more than friendship between them.  Now that she’s dumped the boyfriend, it seems odd to think of each other romantically as they’ve been friends forever… but when you recognize your mate, there’s not much to do but go with it.  When Silver is kidnapped the Fur Coats Society does what they can to rescue her, but soon realize that they need to call in help.  Now can the elders on the way get there in time?

There is so much going on in this first story in the series – and some current world building as well.  We start to see the threads that will be woven throughout the rest of the series.  A slightly futuristic setting, an old enemy once again rearing it’s head and a few other small things I noticed and we’ll see how they develop.

Overall it was a delight to reconnect with the children of couples whose stories I enjoyed, and in some cases knew these characters when they were mere babies and young kids.  If you love Shifter Romance then Trouble In A Fur Coat needs to be on your reading radar.  If you haven’t read the other series, don’t let that stop you for this one is a fully developed story outside of those series with a thread of connection.  It might even tempt you into starting back at the beginning (which I highly recommend).