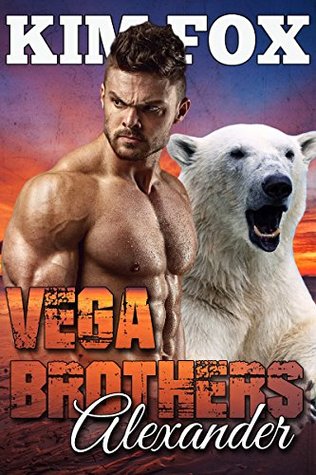 Alexander is one hot mess.  Yeah, he’s hot in looks, and hot tempered as well.  The mess?  Well, he’s become an absolute jerk since returning home to the ranch after the brothers’ military experience.  He’s out of control not only in bear form but his human as well.  Nasty, cruel, mean hearted are just some of the words his brothers and their mates would use for him right now… and those are the polite ones.  Their father’s will has left them all with the problem of finding mates or losing their home to the state, and Alexander has been the biggest obstacle to making that happen.  He’s done everything in his power to scare the ladies away from their mates, and refuses to even consider looking for his mate.

What his brothers don’t know is that Alexander is fully aware of the jerk he’s become.  Yet it’s become almost impossible to keep his bear under control.  It’s a constant fight to remain in human form and his best bet for survival is to take his brother Khan’s place when the General comes back to drag one of the Vega shifters back into dangerous duty.  What his bear wants is a mate, and Alexander will not allow himself to face what his father did so they are in constant battles for control.

When Ava’s sister, Elena comes for a visit no one expected Alexander’s mate to be willingly delivered to their doorstep.  Least of all Alexander.  But his bear knows his mate and takes matters into his own hands, now it’s up to Alexander and Elena to figure out what they mean to each other.

Through the earlier stories, I’ve always had a soft spot for Alexander.  Yeah, he’s a brute in more ways than one, but it’s also obvious that he’s hurting deep down and has no clue what to do about it.  Elena is the perfect partner for him.  They might appear on the surface to be totally opposites, but she holds the key to his happiness.  And he already is the one man who she can see herself with forever.  Now they all have to face the General’s return and the consequences of their actions will change so much.

If you’re in the mood for some hot men, sassy women and a touch of danger, then Vega Brothers Alexander is sure to fit your needs.  I’d recommend this one and the entire series, its’s just a sexy fun ride.