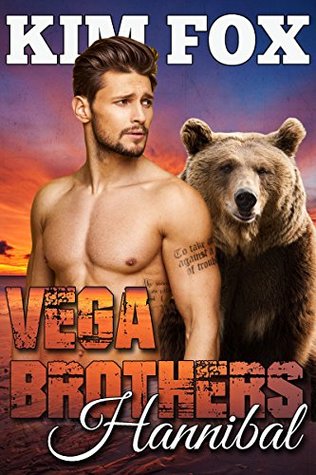 Montana’s Most Eligible Bachelor and bear shifter, Hannibal, is losing his mind. His face has been plastered on the cover of the country’s most popular newspaper, his three brothers are pressuring him like mad to get married, and he has crazed, money-hungry women banging down his door. He doesn’t want a mate and everywhere he looks, people are trying to shove one down his throat.

Mikki, has just settled down in the spectacular town of Colwood, Montana. She has a job that she likes at the bar in town and everything is going perfectly for the first time in a long time until she makes an innocent suggestion to the hot, frustrated bachelor who walks into her bar. He takes her pretend engagement suggestion as an invitation and her nice, new life gets flipped upside down on her head.

Hannibal and Mikki’s fake engagement begins to grow into something more, but is it acting or are the feelings real? And with the military threat from the Vega brother’s past coming to a head, will any of it really matter?

Hannibal is the last of the Vega Brothers who needs to find  his mate before the deadline runs out on the stipulations of their father’s will.  Truth is, Hannibal isn’t wanting to find his mate any more than his brothers did – at first.  His new sister-in-law, Elena has taken matters into her own hands by using her superior reporting skills to deem him the Most Eligible Bachelor in Montana and plastered his face across the front of the publication she works for.  Yeah, nothing subtle about Elena.  *grin*  Now Hannibal is overwhelmed with emails, women (and men disguised as women) are showing up at the gates of the ranch all out for a piece of Hannibal… or maybe some of his reported vast fortune.  He’s had enough, and escapes into town and his favorite bar where fate is waiting for him.

Mikki has been burned, badly, by the men in her life starting with her horrendous father.  Her choice in men is questionable since she’s now stuck with the debts of her ex-boyfriend and partner.  The job at this bar is barely making ends meet, but she’s surviving and right now that’s all that matters.  When Hannibal shows up and soon after his rather questionable date, Mikki is beyond amused by this handsome man’s dilemma.  Half joking she offers a pretend engagement to help him out of his troubles for a price, of course.  She might have been joking, but Hannibal was desperate enough to avoid all this silly eligible bachelor thing that he takes her up on the offer… not realizing that he’s just joined up with his fated mate – and she brings one huge surprise along with her.

I liked Hannibal and Mikki together.  Sure, at first she’s all about the money and the huge ring, but that quickly fades as she is struck with the bonding from Hannibal’s bear.  Now they both have to convince each other that this could be real, if they let it be.  I believe if you’ve read the entire series you’ll know some facts about Mikki as they are presented.  She makes an immense decision about the Vega brothers’ and their mates futures.  It’s heartbreaking and satisfying at the same time.  You’ll see.  We’re also introduced to another of the General’s shifter groups, the Clawed Squad – and they are even more rough and tumble than the Vega brothers.  They will segue way us into the next connecting series.

In all it’s been a fun, sexy series with interesting shifters and the women who for some reason love them to pieces.  *wink*  If you’re in the mood for some sexy times with some handsome, intimidating shifters then this is a series you’ll want to get started on.  Complete fun.