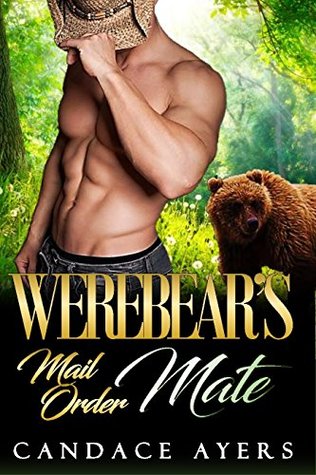 Tanner Holt is a bear shifter who neither wants nor needs a wife. For the wealthy rancher, his daughter Chloe, foreman Josiah, and ranch hands are all the family he needs.

Chloe Holt loves her dad, but she needs a mom. So, armed with her dad’s credit card, the ten-year-old finds them the perfect wife and mother.

She prays that the pretty lady with the kind eyes will give them a chance… and that her dad doesn’t ground her for life when he finds out!

Heather Ayer is down on her luck and has just done the craziest thing. She applied to a mail-order bride agency. Marrying a man she’s never met is crazy. Then again, maybe it’s the fresh start she needs.

WEREBEAR’S MAIL ORDER MATE begins the Jackson Valley Shifters series by Candace Ayers.  This is a revised edition of a title that was originally released in 2017.  I did not read that version of the story so I can only give you my thoughts on the May 3, 2019, release.  And that opinion is that this is a good, entertaining story that any reader of Shifter Romance would enjoy.

It’s easy to understand the desperation Heather feels as she sets off on this journey into the unknown.  Life has tossed her some very hard situations recently and she’s still getting her head wrapped around what’s happened.  But she has to do something, and Chloe’s letter touched her so much that she made the choice to take a chance on her future with this father and daughter.

Tanner is a man of secrets, one huge one that he’s keeping from his daughter.  He’s a good man, a devoted, loving father and he believes that’s all life has for him.  He’s wrong, but will he open his eyes and take a few risks to ensure that he, Heather, and Chloe have that happy ever after for a lifetime.

I had a good time with WEREBEAR’S MAIL ORDER MATE.  Chloe is the main scene and heart stealer here, this young lady knows what she wants, what her father needs and sets out to get it.  Heather believes the crap that her jerk of an ex spewed at her and it will take a good man to change her mind.  Tanner is at times clueless, and I found that endearing, for the most part.  What he thinks he’s saying but what actually comes out of his mouth are often two different things.  So in some ways, he creates his own troubles but takes fast action to fix it.

Several interesting secondary characters will have me returning to this world to discover what comes next.  If you love a fun, entertaining Shifter Romance that sizzles and isn’t afraid to show an Alpha man being a bit clueless then you’d enjoy WEREBEAR’S MAIL ORDER MATE.