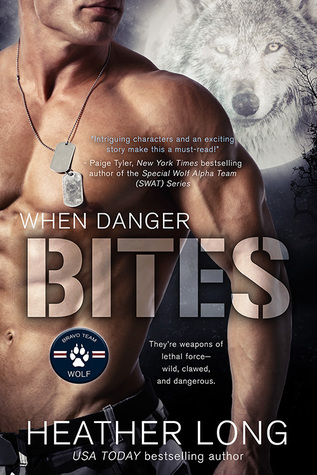 Buttoned-up Corporal Kaitlyn Amador is dangerous on every level. As a human, she poses a threat to Marine Captain Jax Raymond’s special Force Recon unit. Though the team has a reputation among the other recon units, only their commanding officer knows their secret. As a woman, the danger posed is entirely different. Jax can survive the temptation for only so long before his wolf takes over and pursues what it wants.

Military intelligence specialist Corporal Kaitlyn Amador is the first woman in the Marines to be assigned to a recon team. And everyone’s watching her. Her mission? Not only prove herself worthy of her place in the group, but uncover the mystery of why Bravo Team is so successful. A mission that gets more difficult every time she’s near Jax…

Titles in the Bravo Team WOLF series include:  When Danger Bites – Bitten Under Fire – Black Wolf Down –

If When Danger Bites is any indication, it looks like the Bravo Team WOLF series is going to be an intriguing, sexy adventure.  Yet the thing that some readers don’t take into consideration (or even think of at all) is that this story is the first in the series.  It’s a slow burn type of romance with definite bits of mystery and the paranormal involved.  There has to be world building in this type of series.  There simply has to be.  Every author brings their own spin on Shifter lore, which is great for those of us who are totally addicted to this sub-genre… like me.  So I wasn’t the least bit surprised that there are a lot of details, relationships established and introductions of key players of this team.  So, I said all of that to ask you to be a bit patient with When Danger Bites.  There is an intense, interesting story with sexual tensions, mistrust and trust building decisions being made in this opening story.  My imagination was captured by the premise of this series, and I believe yours will as well… if you allow it time to.do so.

When one recon unit has a higher than usual missions success rate eventually someone is going to notice.  It could be the highly skilled men on that team who work like a well oiled machine, it could be dumb luck or it could be that these men have a certain… additional talent for this type of work.  No matter the reason, someone higher up is asking questions about Jax’s team – and they’re willing to discover their secrets with secrets of their own, an undercover Marine looking for a spot on that particular team.  The fact that she’s a woman is both commendable and unusual, now only time and politics will tell how successful she will be on either mission.

I enjoyed When Danger Bites very much.  Yes, there is building on many levels, but I personally do not mind allowing a world to be built so that I can dive right into it again in the next book.  Some readers do mind, for those I really wish they would be patient and enjoy the beginning of what looks to be a very good, deeply intriguing series.  I am looking forward to hearing the stories of the other members of the team, and seeing how Kat and Jax’s relationship moves onward.

I would recommend When Danger Bites to any reader who enjoys Military Romance, Paranormal Romance or Shifter Romance – add in a touch of Mystery and Suspense then you have an interesting world that many will want to spend more time in through the rest of the series.  Danger, secrets, sexual tensions, friendship, betrayal and acceptance.  These are all aspects of life that you will find in this first story of the Bravo Team WOLF series.  I believe you’d enjoy it, and I’m definitely looking forward to the next book.

**This review originally appeared on my Keeper Bookshelf blog.**