Wolf At The Door by N. J. Walters 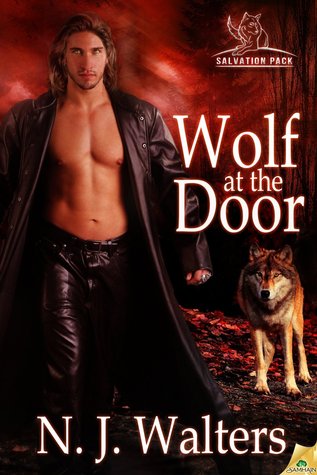 Gwen makes her living freelancing stories debunking the paranormal world and it’s legends and lore.  Sure, she’s inherited a cabin in the back of nowhere and she now has the time to write that great story she’s always dreamed of… but a girl’s gotta pay the grocery bills.  She might have the cabin, but she’s still gotta live.  She doesn’t believe in things that she cannot see, so when she got an offer of information on real live werewolves she jumped on it.  Meeting in a cemetery was probably not her greatest moment, but the guy wanted privacy and where better than among the dead.  Flash drive securely in hand she returns home, a touch spooked by the encounter but determined to start reading as soon as possible.

Imagine her surprise when later that night two men show up at her door demanding the flash drive.  Two honest to freaking reality werewolves.  She did what any sane person would do, she fought and tried to escape – only that didn’t work out too well for she crashed her car and ended up in the wolves den anyway.

Jacque and his brother, cousin and two friends had escaped from the oppressive cruelty of his father’s Louisiana pack.  The Alpha was mad with power and ruled with an iron claw that was quick to punish, usually with death.  That his sons had defied him and dared to leave without his permission to set up their own pack pushed his madness even further over the edge.  Now Jacque and his Salvation pack were constantly on the lookout for trouble heading their way for they knew they would be found and there would be a battle that not everyone would survive.

So when he discovered that Gwen had been given information that could not only oust them to the world, but to his father as well, Jacque did the only thing he could do – retrieve the information and learn how much the woman actually now knew.  It took only a few minutes to discover that she’d opened the files and had started reading the truth, a major misstep on her part for now her future was guaranteed – and not how she’d expected.

To complicate matters both he and his brother recognized Gwen as a possible mate.  While he suspected his brother only wanted her because Jacque did, still it would cause even more trouble in his new small pack.  When she tried to escape he stopped her, that she crashed her car and ended up with a concussion was an unfortunate side effect.  But it did make it easier to bundle her up and take her back to their compound.  Her life as she had known it was now over.

Wolf At The Door paints such a picture of desperation – the men’s determination to escape from a life of cruelty and Gwen’s panic at finding out that those things she didn’t believe in actually did exist, and that she was falling in love with one of them.  As the first story in the series,, the world building was tight and it was easy to picture their new home in the forest, as well as the utter single mindedness of remaining free to live within their own pack, a pack with rules that made sense and where every person has a say, is listened to and respected.  Even if the Alpha, Jacque, had the final say.  The secondary characters are well defined and each has the beginnings of their own unique personality.  It’s a given that we’ll learn more about everyone in the rest of the series – but there was enough given now to make them real, with honest emotions and needs.   We also get a taste of the viciousness of their former Alpha – and the lengths he will go to in order to not be defied by his own kin.

Gwen and Jacque’s romance was such fun to watch.  From total confusion and defiance to grudging acceptance to absolute devotion – their journey hits all the right buttons.  Gwen will turn out to be this Alpha’s best asset as life changes for them both in so many ways.

I completely enjoyed Wolf at the Door and would recommend it to any lover of Shifter Romance.  At this time there are seven (7) stories in the Salvation Pack series.  Please don’t let that number stop you from starting this – I’ve read them all on a binge week and am writing up the reviews now – they are all so worth your time and effort to get to know these amazing wolves and their mates.