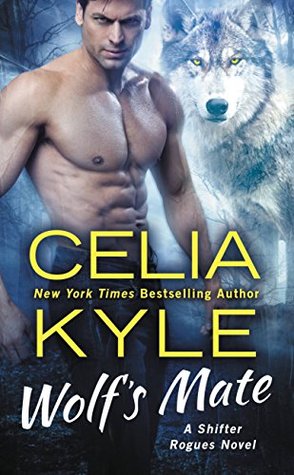 Danger shouldn’t be this sexy…

Cougar shifter Abby Carter always plays it safe. That’s why she’s an accountant–no excitement, no danger, and no cocky alpha males. She loves her quiet life, but fate has other plans. When Abby uncovers the shady dealings of an anti-shifter organization, she’ll have to trust the too-sexy-for-her-peace-of-mind werewolf Declan Reed… or end up six feet under.

Declan Reed is starting over. After two years with Shifter Operations Command, it’s time to put his past behind him. Now Declan is the only thing standing between the gorgeous Abby and an early grave, and if he’s going to have any chance of keeping her alive, he’ll have to embrace the darkness he’s fought to keep at bay. But first he has to convince Abby that there’s no safer place in the world than the arms of a big bad werewolf.

Wolf’s Mate is the first story in the Shifter Rogues series, and introduces us to a very unique and intriguing world.  Although Abby and Declan are the main focus of this story, it is very much an involved with other the characters beginning.  I would usually say that the introduction of these secondary characters was part of the world building — and I’m sure it is, but it also seems to be laying the groundwork for seeing these men and their eventual mates as a pack, a group of individuals that will be in and around every other character’s lives for the duration of the series.  I hope that first impression is correct for that is my most enjoyed type of series, where we never truly leave a previous couple behind but they are still a part of the bigger story.

It took me about a chapter to fall head over heels in like, love and lust with the characters in Wolf’s Mate.  Such a diverse set of military bad boys, each unique in their animal, their attitude and their personality.  The villains are truly despicable, and truth be told, we don’t really know exactly who the real villains are since there are some dubious actions taken by an agency that is “supposed” to be shifter run and shifter friendly… maybe some bad seeds, time will tell on that.  The action is fast paced, gritty and intense — kind of like an out of control roller coaster ride, one you never know if it’s going off the rails or not.

Declan and Abby are so right for each other but it will take some time, some trust and survival for them to really admit or even acknowledge what they are to each other… mates.  Wolf’s Mate has sharp witted banter, some of the best one liners anywhere, a puzzle to sort out, intense rescue missions, a few unexpected twists, turns and surprises, as well as a realistic, believable (for the genre) story to tell us.  I closed the final page already wanting to dive into the next one.  That’s a pretty high compliment to the author when a reader doesn’t want to leave their world, even for a little bit.

I’ve been vague on purpose about the actual story, for I believe you need to experience that first for yourself.  I would highly recommend this story to any reader who enjoys Suspense, Mystery, Action, Paranormal, Shifter or Romance.  It’s an intense world filled with unique characters and you’ll be flipping pages quickly to discover what comes next.  I’m betting you’ll be quickly addicted to this series and be waiting impatiently for the next hero’s story to release.  I know I certainly am.