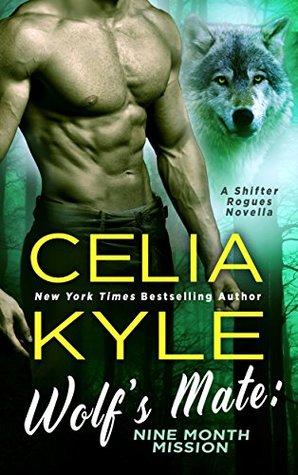 Werewolf Declan Reed’s mate is lying to him. Not outright, but a lie by omission is enough to tweak his tail and anger his wolf.  Abby is pregnant and she still hasn’t told him about the baby. He’s given her time, but the moment he gets her alone, he’s going to demand answers.

The trick is finding her alone because his mate has been adopted as an honorary sister to the rest of Declan’s Shifter Operations Command—SHOC—team.  That means that when they’re not on a mission, he’s got at least one team member—sometimes more—at his home.

Thankfully, Declan is a highly trained SHOC agent. If he has to kidnap his own mate to get some privacy, he’ll do what needs to be done.

I happen to love when authors give us a little glimpse into beloved characters lives in-between books – and often that’s exactly what the .5 books are, a sweet gift, a peek into everyday life… even with extraordinary characters.

Wolf’s Mate: Nine Month Mission really shouldn’t be read before you read Wolf’s Mate.  Really, go back to book one if you haven’t read it – this one will be worth the wait, promise.

Well, it’s pretty obvious from the title what this one is all about… and I absolutely loved it.  Laugh out loud moments galore, the feisty bantering we’ve come to expect from these guys and gal as well as a deepening of the bonds that tie all of these characters together.  I laughed, got a bit misty eyed and enjoyed every moment back in this world.  Since I did another binge read of these first two titles in the Shifter Rogues series to get ready for the release of Tiger’s Claim I’m totally ready for Cole’s story.

I’d definitely recommend this sweet, funny, sexy short glimpse into the crew’s lives… but please, you do need to read Wolf’s Mate first.