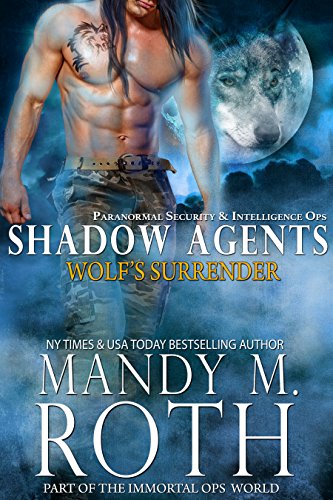 Total surrender doesn’t come easy to a natural-born alpha. Shape-shifting Special Operative Brad Durant has been held against his will by the enemy for nearly a year.

He’s given up hope and is fast giving up his will to survive–that is until a hot-tempered, redheaded succubus is placed in the cell next to his. She calls to his wolf on a primitive level and he won’t let anyone or anything harm her. Giving his body to the little minx is easy, but guarding his heart is much harder.

Wolf’s Surrender begins the Shadow Agents series within the Immortal Ops World with a stunningly intense story full of dangerous situations and a couple finding their mates in a most unexpected setting.

Part of what I love about these combined series is that while we may not know all of a secondary character’s story when we first meet, we will run into them again at some point to continue the overall arch of the series.  And that’s exactly what happens in Wolf’s Surrender… we’re going back to the jungle compound where Weston was held for so long and where Mae with Corbin escaped from but left behind Mae’s friend Alice for reasons you’d discover through reading Act of Command (nope, I’ve let enough out of the bag).

Alice is a succubus who feeds off of sexual energy.  The same night that Mae was stood up by Corbin and kidnapped – so was Alice when she went to a frat party, felt off about some men there, and got hit by a knock-out dart.  When she awakens, she’s certainly not in her college town anymore.

Brad has been held by evil incarnate creatures of The Corporation for about a year now, or it might be if Brad were able to keep track of time.  The beatings and the experimental drugs he’s been used to test often makes the time a very fuzzy concept.  Yet when Alice is deposited in the cell next to him only one thing matters – get her to safety and kill those who dared harm her.

Wolf’s Surrender really gives the reader a taste of what it’s like to be held captive for experimentation by the enemy.  We’re aware of their atrocities in all stories, but sometimes that is brought to the forefront in painful details.  What Brad has gone through this past year no average man could have survived, and at this time, Brad and his wolf are very close to the final breaking point.  With Alice’s arrival, Brad knows she is his mate, and together they’ll make their escape from this torture or die trying.

I loved Alice.  She’s a spitfire, strong, stubborn, and not afraid of anything… even when she should be.  She is the perfect match for Brad as together they plan and execute their escape.  Wolf’s Surrender is intense, it’s painful to read at times, but it is also an amazing story of not only the bond between Alice and Brad but of survival as well.  I was completely wrapped up in this story, and it is an excellent introduction to the Shadow Agents series part of this world.