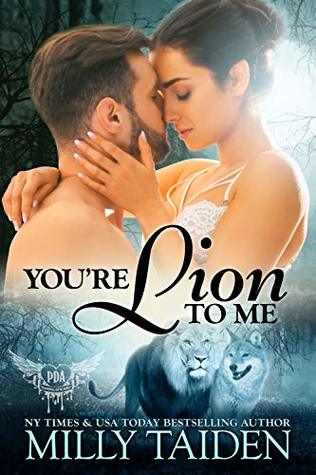 With all respect to and enjoyment of all the many talented authors who have stepped into the Paranormal Dating Agency world to tell their tales — there is frankly nothing like going back with Milly Taiden.  Because, again frankly, no one writes Gerri Wilder like Ms. Taiden.  And, man, was Gerri at her most mischievous best in  YOU’RE LION TO ME.

Azai may have had a fast one pulled on him by his honorary aunt and good friend Gerri Wilder, but this Alpha wolf knows when he’s been handed the gift of a lifetime, his mate.  Now all he has to do is unschedule all the pranks, solve a few annoying mysteries and win this lion shifter from another planet over to have her stay here with him as they lead his pack together.  Simple, right.  Not so fast.  If only life were that easy.

Dalissa is fascinated with Earth, especially since her best friend is from that planet.  On Aurora, Darlissa is considered a smaller shifter and is frequently put down by her parents as not good enough for much of anything.  When she is asked by her friend to make a trip to Earth for her to tie up some loose ends, pack up her personal things from her apartment, that kind of thing well Dalissa jumps at the chance – to get to meet the famous or maybe infamous matchmaker Gerri Wilder is an added bonus to this trip.  Maybe Gerri can find the love of her life… probably not, she’s not that lucky.

Yet Azai and Dalissa are indeed being set up… but there’s more than love in the air as a vicious villain is also out to cause chaos between the neighboring wolf pack and lion pride… and is after Dalissa as well.

YOU’RE LION TO ME is intense with a mystery that is not at all what you’d expect when that reveal comes along.  I was caught up in not only the romance but the danger that so many faced from the threats against the pride, the pack, and the lovers.  There are certainly clues, but they’re also well disguised – this one is well worth the shocking surprise to see what happens next.

Dalissa and Azai work well together, their differences offset each other and strengths come in surprising areas.  I loathed Dalisssa’s parents, and their actions would be enough for me to disown then without a doubt.  I was easily caught up in YOU’RE LION TO ME, the characters are engaging, certainly sexy and there is a great combination of banter, laughter, and danger.  If you love the PDA world then you’ll love this one.