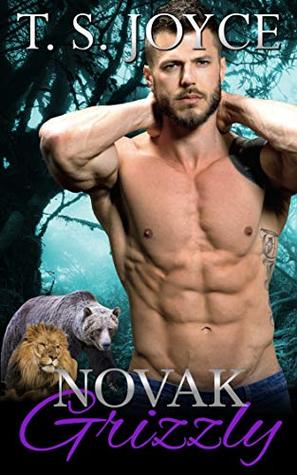 The Daughter of Beaston is hurting. Remington Novak is stuck in a city, her whole life altered for a man who didn’t keep her. A life change comes in many forms, but for Remi, it comes as a newspaper clipping, sent by her best friend. A Last Chance Crew up in the mountains is looking for help, and her skill set matches the requirements. Must like animals? She was a grizzly shifter. Must be okay with crass jokes? She was raised a Grey Back in one of the roughest Crews in existence. She could surely handle a few rowdy boys.

When she shows up for the interview though, it’s clear she’s made a grave mistake. Kamp demands her inner bear’s attention immediately, but he’s dangerous to her body and soul. Something’s wrong with that lion shifter, and the more she tries to figure him out, the deeper she falls into a dangerous admiration for him and these mountains he’s claiming as home.

Kamp is out of options. His days are numbered in his Crew, his lion needs to be put down, and every day looks just the same. Wake up, fight the Alpha, fail at his job, sleep, repeat. He’s lost too much to recover, but one look at the fiery-eyed beauty, and this lion shifter lumberjack aching to change his destiny. It might already be too late, but now every day is worth fighting for just to see the growing smile on Remi’s face.

Two damaged shifters, one fate, one helluva mountain to climb to get this Crew to C-Team status. No one could’ve got him living again, but maybe…just maybe…the Novak Grizzly can save him.

This series has a tie-in, a continuing (a strong one) to the connecting sets of series that make up the Damon’s Mountain universe.  For a complete listing of those series, and links to the reviews done here at Shifter Haven, please visit our T. S. Joyce page.

Let me just get this out of the way — *Huge Fist Pump* and a “Hell Yeah!”… okay, I’m calmer now, thanks.  Daughters of Beasts is a series that I didn’t know I was waiting for until I saw this book, then it all fell into place once again as I was transported back to my favorite shifter series of all.  Yes, of all the many, many shifter romances I read this group of misfit shifters just strikes a cord in my heart and I’m hooked for good.

In my excitement over Novak Grizzly I’m being very careful to not let any spoilers slip past me… in fact, I’m triple checking before I hit publish.  Remi is the daughter of Beaston (Gray Back Broken Bear) and Aviana, sister to Weston (Novak Raven)… and friends with some amazing shifter crews and families.  She made a mistake and believed herself in love with the wrong man, and over their four years together he slowly changed her from the woman she was to his creation – then he simply left her without a thought.  Remi is broken, believing herself unlovable until her friend Juno steps in to put her on the path to her future.  Since her father is not only the famous Beaston, but somewhat of an infamous seer as well, when Dad agrees to Juno’s plan Remi takes notice, even if she’d rather stay in bed with a gallon of ice cream.  She has no idea what she is getting into with this broken, messed up group that can’t even claim the word Crew… but she knows that one man sets her heart on fire, and makes her need to heal not only Kamp but those other two crazy guys as well.  She’s not part of the Gray Back Crew for nothing, and she knows how to get serious and kick butt… especially when her happiness and her mate’s sanity is on the line.

I had an absolute blast with Novak Grizzly, and it’s a good thing I was home while reading ‘cos there was a huge grin on my face the entire time.  So, here’s the tricky part – if you have not read the entire connecting series that make up the Damon’s Mountain Universe there are some small nuances, some reminders of things in those earlier stories.  Will not knowing those nuances spoil this one for you… absolutely not, you actually won’t be aware that they are important unless from Remi’s reactions.  There are several series that connect in some way, so asking you to go back and start at the beginning is unrealistic — but they are an amazing adventure and well worth the time spent to read them, and I’d recommend it.

I loved Novak Grizzly so much, and to be back with these Crews is simply amazing.  You’ll run into some familiar faces, some information will go “click” in your brain as you make connections and you’ll fall in love all over again with another crew of misfits that somehow work… together.  If I could give this one a 10 star rating, I would… it’s that good.