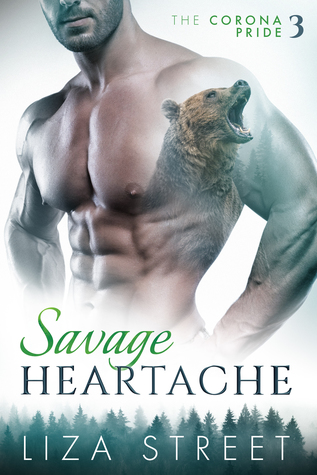 Seeking sanctuary amidst a ragtag clan of shifters has never been so dangerous…or so fun.

Famous in the book-blogging world for her honestly hilarious romance reviews, mountain lion shapeshifter Nina Vidal detests the irony of her life—she makes a living off of analyzing happily-ever-afters, but her own HEA is sadly out of reach. To escape the heartache of staying in her pride and watching all her friends pair up, she seeks refuge in another clan of shifters, not caring that the grumpy alphahole, Jameson, doesn’t want her there.

Grizzly shifter Jameson Cooper has enough on his mind without worrying about the sexy lion girl who’s taking over his clan. He’s alpha of the Rock Creek Clan, and he’s still mourning the loss of his mate. But there’s something about Nina—she’s the one person who won’t tolerate his bossiness or his angst, and he finds himself drawn to her again and again. When it turns out that vampire trouble has followed her from the Corona Pride and Jameson’s clan wants to turn Nina away, Jameson must fight to keep her safe and close by his side.

Nina has finally accepted that she’s not going to find her own happy ever after in the one man she’s pinned her hopes on for so many years.  Yeah, sure, Rafe had given off enough hints that he just wasn’t that into her, but in her stubborn ways Nina ignored all the signs – right up until Rafe found his true mate.  Not much to do after that but to accept it and move on.  Although her pride probably hadn’t expected her version of “move on” to actually mean move out of the pride’s territory headed who knows where, just not there.  She also never expected local trouble to follow her either.

Jameson was alpha of a ragtag, motley crew of a clan that guarded it’s privacy with intense vigor.  How this mountain lion shifter ever expected to be allowed to hole up here for a while was beyond him.  There was something about Nina that drew him, and that fact alone angered him enough to deny her a place to stay – right up until she pulled out the one card that would work when nothing else could have changed his mind.  His clan is small, and there are definite lines drawn in the sand with a few members.  The last place Nina should be was here, he couldn’t guarantee her safety, but he also couldn’t get her out of his mind.

Savage Heartache is a fun, sexy story on so many levels.  Nina is priceless, she speaks her mind, does what she wants and will stand down to no one – not even one frustrating alpha.  Jameson is a complex man who deeply mourns his past while almost afraid to embrace what could be his future.  He makes mistakes, but at the heart he’s a perfect fit for Nina.  When trouble finds her, he’s right at her side.

Nina is such a fun character.  She’s a romance book blogger, and there are actually active links within the book to her blog.  That was an unexpected brilliant touch of reality.  Be sure to check that out as you read Savage Heartache.

Once again, I loved this story and I’m glad that I did go back and start the series from the beginning.  Otherwise, my reactions to Nina might have been different not knowing her background.  There is a very logical reason I will always recommend that you start series from the first book, you get so much more from the experience when you do… in my opinion.  I would highly recommend this story and the entire series to any Paranormal Romance or Shifter Romance reader who loves vibrant characters, touches of danger, certainly sexy times and a cast of secondary characters you’ll always want to know more about.