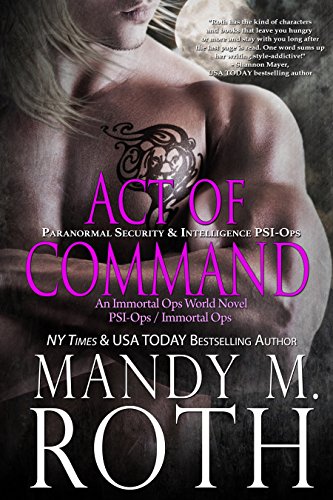 Captain Corbin Jones heads his own Paranormal Security and Intelligence Agency Special Ops team. He’s used to being in command. Used to having to make the tough calls. As a lion-shifter, he’s no stranger to fighting his primal instincts. He’s had them well in hand for most of his immortally long life—that is, until he catches a scent that sets his body on fire.

The scent of his mate.

Mae wasn’t looking for love and certainly didn’t want to go on a blind date. When she’s stood up and then ends up in the hands of the enemy, she’s not sure who to trust. Not even when the very same man she’s been fantasizing about is deposited next to her. Fate—and her own supernatural hormones—won’t be denied, and she finds she can’t control the desire burning through her. The only problem is, her fantasy man, the very man who came to rescue her, is now in the hands of the enemy as well.

Act of Command, Corbin and Mae’s story, the fourth in the PSI Ops series was riveting for me from beginning to end.  I so wanted to smack Corbin upside the head so often during this story – then I’d immediately feel bad for that since he really did beat himself up enough once he knew the truth of his actions.

Corbin has been, well, harassed by his mother to find his mate… and to go on a blind date that she’s arranged with a friend’s daughter.  Apparently, no one says no to his mother so he reluctantly goes without much enthusiasm… at all.  Mae wasn’t any more thrilled but she also was following parental pushing, and perhaps a bit from her friend as well.

With all the crazy Alpha things these men have pulled so far in these combined series, I have to say that I was most angry at Corbin for some of his actions.  No, not going into details for that’s spoiler territory but still he really ticked me off.  He eventually redeemed himself… but still.

I love the brotherhood of all the division of the Immortal Ops teams.  It’s one of the strongest draws of this series for me, and we see it in action again in Act of Command.  We also get to see another side of Corbin as he blames himself for Mae’s kidnapping and as he rescues her as well.  This strong lion shifter really is a softie when his mate is involved.  Sexy as sin goes without saying, but I really enjoyed seeing Corbin being brought to his knees by his love for Mae.

The situations Mae and Corbin find themselves in are intense.  We’ll meet some new folks, re-engage with some very vile villains, and watch two people find their way to each other after a rocky beginning.  I loved this story, it’s one of my favorites so far… yeah, even if Corbin did (for a while) annoy me.

Now it’s on to the next story – I’m really loving this combined series world and if you haven’t discovered it yet, I would highly recommend you check them all out.  So worth it.

I read this title through my Kindle Unlimited subscription.  Yet, these series are leaving KU in November of 2020 and will soon be available on all vendors.