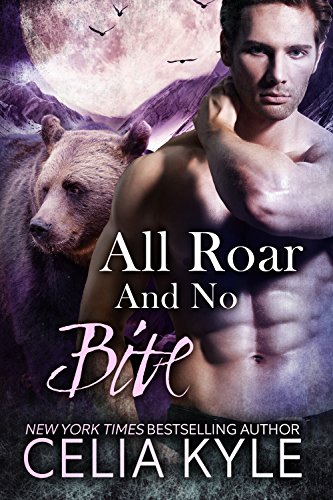 Lauren and Van make a very volatile and interesting couple.  Lauren has gone after the Mayor with a baseball bat – the Mayor is once again beating up his wife, Lauren’s best friend – Van is the police officer who arrives to separate them and arrest both their butts, oh by the way Van despises humans  Yeah, quite an unusual first meeting.  Especially when Van’s bear recognized Lauren as their mate.  When a short time later the sleazeball Mayor attacks Lauren on the street, Van’s defend his mate senses go into overdrive and he takes her back to his home for her protection.  Except no humans are allowed at the bear’s home, unless they’re mates.  Even more complications for one human who only wanted to save her friend – and maybe get to know the sexy officer a bit better.

One precious little bear shifter will make a huge first impression on Lauren, and in a way seal her fate.  Or at least give it a good kick start.

I had a lot of fun with All Roar and No Bite, and this one pretty much cemented my need to read the entire series, and then start on the Kindle World additions.  There are discoveries, danger, friendships to be made, mates to claim and a whole lot of sexy moments in between.  If you love Shifter Romance then this is a series that you should get to know better.  It has everything I happen to love about sifters, and I’d definitely recommend it for any Paranormal Romance or Shifter Romance reader.

I originally read this story through my Kindle Unlimited subscription, but its not available in KU right now.

Available in a variety of formats and  for the Kindle