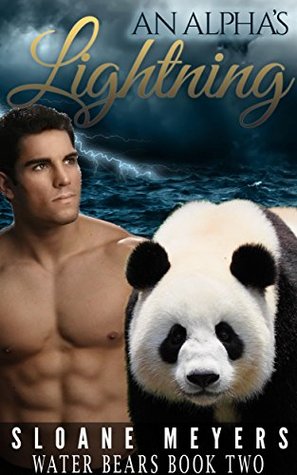 An Alpha’s Lightning introduces us a bit more personally with Ace and his lifemate Jade.  Ace hadn’t been all that worried about finding his mate.  He knew the danger he and the other panda bear alphas were in, hiding from the scientists who would do everything in their power to eradicate them from the earth.  Bringing in a lifemate on that kind of future probably was an added danger, but the truth really was he wasn’t looking and figured if they were indeed fated mates they would find each other eventually.

He wasn’t looking – until he found her.  Jade.  A beautiful, dedicated woman who build a life around rescuing the creatures of the sea.  The seals, sea lions and whales along the shore were in constant danger – it was her job and her life’s work to protect the,, shelter them, get them healed and back into their natural world, the ocean.  It was on a unique rescue that Ace first heard her voice directing his rescue helicopter and his team mates in the search for an injured baby whales’s pod.  That rescue was successful.  And a few days later Ace headed out to the rescue center to learn more about their operation and Jade.

Then he was certain.  But Jade was holding on to a heartache in her past.  She had lost the man she planned to marry to senseless violence and vowed to never again lose her heart to a man whose profession could get him killed.  Ace qualified big time for that category.  But never say never, especially around a stubborn and determined panda shifter.  As he slowly wore Jade down with his easy going friendship, reality struck with a vengeance.  Could he risk her was soon a more important question.

Jade and Ace’s story takes us deeper into the dangers of loving a panda shifter.  And of the rewards as well.  I really enjoyed An Alpha’s Lightning.  And was pleasantly surprised when characters from two other bear shifter series by Ms Meyers were brought into the mix of this story.

If you adore shifters then Water Bears is an exciting, engaging, certainly sexy and enjoyable series to get caught up in.  I’d definitely recommend An Alpha’s Lightning to any shifter or paranormal romance reader.