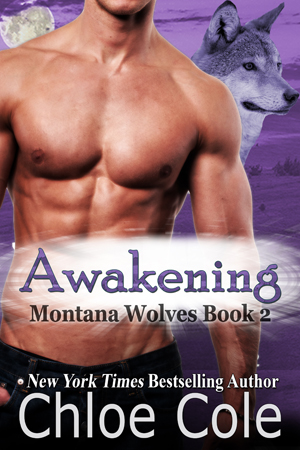 Jax Mulaney’s mate is dead and her killer’s trail has gone cold. Eaten up by grief and guilt, it’s an effort just to get through the day. Now, after a year in mourning, his animal instincts have reawakened. As he struggles to control the need clawing at him, his pack mate Chandra’s sexy body and snappy wit put his self-discipline to the test.

Chandra is heartsick watching Jax struggle, and wants nothing more than to comfort him. If she takes his offer of passion without strings, she knows she’s in for a world of hurt. But if she refuses, she might blow her one chance to convince him that she can rock his world and fill the empty space in his heart.

Read on for my thoughts on Awakening.

Chandra was head over heels in love with Jax pretty much at that first meeting – the night she left her former pack and asked to join Liam’s.  Jax was still reeling from the death of his mate Sara who had been brutally killed by a hunter or worse.  Chandra had accepted that they would be pack mates, friends even though she wished for more one day when his heart had healed.  At least she told herself that to get through the knowledge that his heart had seemingly died with Sara.  Oh he was devoted to their son Ryan but that’s a father thing and a constant reminder of the woman he’d loved.

She was okay with it, really.  Until tonight.  When Jax had once again gone out gotten himself drunk and this time brought back a human bombshell for a night in the sack.  She simply could not take the sounds coming from his room down the hall.  So without thought she confronted him.  And in that moment things began to change for them.

It had been a year since Sara’s death and Jax needed the release of a woman.  He knew it was both stupid and forbidden to bring Amber back to the compound but he was too drunk to really think too deeply about that.  When Chan confronted him it was probably the sexiest thing he’d ever seen her do.  Granted, he was drunk and hadn’t noticed much lately but.. damn.  Slowly an idea formed in his addled brain… he didn’t want a mate, no one could replace Sara – but a friend with benefits.  Yeah.  That would work nicely.

There was something off about Amber.  Chandra couldn’t put a finger on it but something was wrong.  Especially when she could smell her cloying perfume hours after she’d left… or had she?  There was going to be a heap of trouble if that human had snooped around where she shouldn’t have and Jax would face the blame for it.  So Chandra had some investigating to do.  Never realizing the trouble it was going to put her into instead.

Jax and Chandra make a sexy, hot couple in Awakening.  And their story is aptly named as Jax is awakening from the grief that he’s held onto and beginning to see that there is life after a mate’s death.  As well as the chance to avenge Sara’s death, Jax also has the chance to move them forward as a couple in their own right with a future yet to be claimed but enjoyed together.

This series has been out for a couple years, but it’s one that is well worth searching for or even revisiting.  If you love Shifter Romance, then the Montana Wolves will provide some very good, sexy and entertaining stories to catch up on.

Bear To The End by Terry Bolryder

Bear To The End by Terry Bolryder