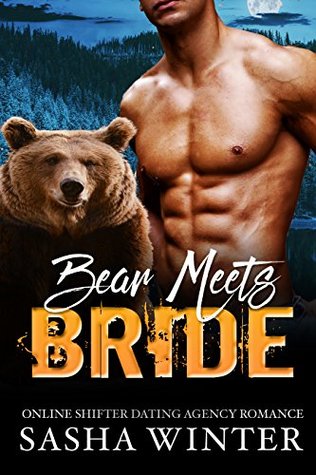 Small-town bakery owner Erin is looking for a good man—a man who will love her exactly as she is, curves and all. So far she hasn’t had much luck in the romance department, but when she finds a new online dating website, things start to look up. The site promises to deliver love, romance, and steamy encounters for women like her…and how could she say no to that? Sure, the site is misspelled as Dare2Bear when it’s obviously meant to be called Dare2Bare, but that’s just a silly typo, right…?

When she’s matched up with local cop Tom Ackerman, she’s thrilled. He’s the perfect man – kind, handsome, dedicated to his work, and even more dedicated to making her happy…although he seems to be hiding something.

She doesn’t expect to be thrust into a murder investigation while dating him, but that’s exactly what happens when a crazed killer sets his sights on her.

Can Tom keep her out of harm’s way…and will he ever let her know his secret?

When it comes to protecting his mate, this bear will stop at nothing…

Montana cop Tom Ackerman has wanted local bakery owner Erin Silguero for years, and when she pops up as a match for him on the shifter dating site Dare2Bear.com, he’s ecstatic.

He knows Erin is his perfect mate, but there’s a small problem. Despite using the website, she somehow has no idea that he’s a bear shifter, and there’s another bear shifter roaming around killing people in the area—making bears very unpopular indeed—so will Erin ever be able to accept him for what he is?

He’s about to find out, because when the aforementioned serial killer tries to target Erin, Tom will have to do everything he can to keep her safe, even if that means revealing his true nature…

Can Erin fall for a bear shifter? And can Tom win his mate’s heart and keep her out of harm’s way while solving the case?

Bear Meets Bride is a fun sexy story.  In truth, there really isn’t much more for me to entice you with about this story since the cover description tells you far more than I normally would have.  *grin – I’m evil like that*

The fascinating part of this story, aside from Erin and Tom’s hot romance, was the murderer who happens to be a bear shifter.  The slow growing concern, the increase in violence and the seemingly purposeful focus on law enforcement and their families brings this search to the doorsteps of those who are seeking to find this killer.  The tension was slow building until it erupted – and it was very well played, in my opinion.

I liked this couple, they were truly two people who got lucky on a dating site and took their flirtation into a true dating, then couple arrangement.  It was a natural progression and the timing made perfect sense.  I always got a bit of a chuckle every time Erin referred to the website Dare2Bear wrong – she was convinced it was a  typo… silly girl.

Overall, Bear Meets Bride was a good, satisfying and sexy story.  And I’ll be on the lookout for more of this author’s works.