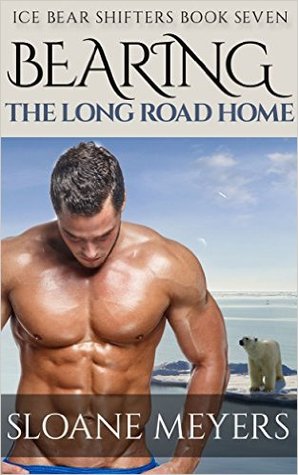 Chloe Powell is a woman on the run. She’s constantly looking over her shoulder, trying to escape the demons of her past. All she wants is to live in peace, and she decides that there’s no better way to do that than to take a job driving across the frozen ice roads of Northern Canada. She wants to get as far away from her Alaskan home as she can, and find a new home where no one knows her name. Everything is going as planned, until she meets Seth: a sexy, scarred shifter who knows exactly where she came from and who she is—or so he thinks.

Seth Evans is the last bachelor in his clan of polar bear shifters. Watching all of his closest friends pair up has been hard on him. After losing nearly everyone in his clan to a rival clan’s attack, he isn’t sure if he’ll ever feel truly happy and loved again. He’s pushed away restless feelings of loneliness for too long, and he decides that a winter of ice road trucking will give him just the break he needs. But his plans for a peaceful season of solitude are thwarted when he comes face to face with a dark piece of his past—a face he inexplicably finds himself falling for. And when he finds more hiding behind Chloe’s dark eyes than he bargained for, he’ll have to decide whether pursuing her is worth the risk.

Can Chloe convince Seth that she’s more than the product of her past? And will Seth be able to love Chloe despite her connection to the scars of yesterday?

Ice Bear Shifters are hot ‘n sexy, and believe in lots and lots of physical lovin’ with their mates – so, 18+ readers.

Read on for my thoughts on Bearing The Long Road Home.

This review is going to be extremely short and sweet.  Bearing The Long Road Home is such an emotional, fitting conclusion to the Ice Bear Shifters series.

Seth because of the physical and emotional scars he bears – and Chloe because of the humiliation and mental, emotional scars that she bears are truly the perfectly fated mates.  Two people who on the surface should be mortal enemies.  One woman who bears an enemies clan name but never took part in the rampages that their insane alpha ordered.  One man who lost almost everyone he ever cared about because of one crazy alpha’s quest for absolute power and killing.  Both bear scars – both deserve a second chance to find a life beyond that clan war.  Of course a romance between the two will be difficult for the Northern Lights Clan to accept, at first.  But there is always  hope, when there is love.

If you have followed the Ice Bear Shifters series from the beginning then you’re probably aware that the series was supposed to stop at #5, Neal’s story.  I am so very grateful that James and Seth got their stories told as well.  Seth’s story and the epilogue at the end is such a perfect wrap up for this series of amazing men and woman.  This is a story that I believe you really need to read.

And maybe one day we’ll get the cubs’ stories as well.  I would really love to see what these cubs who grew up in a life without a clan war can bring to their new mates… but that’s my own wishful thinking.