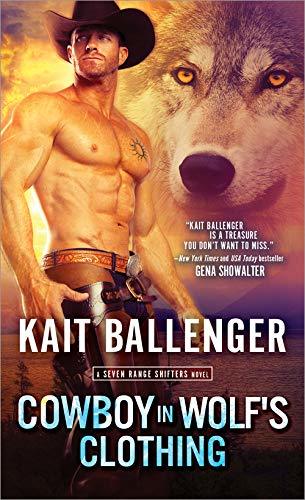 Born a cowboy and bred a warrior…

High Commander Colt Cavanaugh has spent his life defending his pack and its sprawling ranchlands. But the hardened Grey Wolf soldier has a dark secret that could destroy his life forever.

Belle Beaumont is a wanted woman, on the run from the wolf pack that kidnapped her. When fate brings her face-to-face with the Grey Wolf High Commander himself, rivalry becomes a passion, and suddenly more than just her freedom is at stake.

Colt will fight to the death for the healing Belle brings to his battle-worn heart—and for this cowboy wolf, all’s fair in love and war.

COWBOY IN WOLF’S CLOTHING continues the Seven Range Shifters series with Colt’s story.  We get a bit deeper into the running of Colt’s pack, get a better feel for how this pack works and plays together.  Add Belle into that mix, an on the run rogue wolf who happens to also be a very capable doctor and you have a story that will draw you in and keep you there until the final page.  I fell in love with the idea of this series with the first book, and I’m now definitely hooked for the rest of the stories to be told.

Both Belle and Colt are keeping secrets, dangerous secrets and at times they are going to be the worst enemies to their own love story.  I loved the banter between them which simply made them more realistic to me.  There is certainly danger all around them, secrets to be told, trust to be given, sizzling steamy moments and a very good tale to be told in COWBOY IN WOLF’S CLOTHING.

Yes, I’m being vague because for some (if not all stories talked about in reviews) you need to experience this one firsthand for yourself.  But, I will say you will enjoy yourself and be looking forward to the next story to be released.

If you love a good Romance within the Shifter Romance world, then you’ll want to pick up Colt and Belle’s story soon.