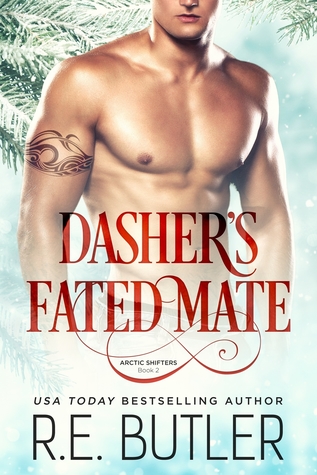 When Mrs. Claus sneaks away from the North Pole on Christmas Eve, Santa sends out a security team to bring her home before dawn on Christmas Day. The team follows the tracking beacon in Mrs. Claus’s coat to downtown New York City, finding her in the crowded streets of the human city. They hustle her into an alley and use magic to take her home to North Pole City.

Merri Blevins has had a rough night. Not only was her adorable elf costume unavailable at the costume store, forcing her to take a Mrs. Claus costume, but she’s late for a Christmas Eve party in New York City. It’s cold, it’s crowded, it’s late, and a crazy woman dressed just like Merri bumps into her and nearly sends her toppling into the gutter. Could her night get any worse?

When Rhys is called by the security team to return to his bedroom after the Christmas Eve run because of a problem with Mrs. Claus, he realizes immediately that the woman wearing the traditional red dress is not Mrs. Claus but his fated mate. She’s human. She’s pissed. And he has to take her back to her human world before dawn or she’ll be trapped in North Pole City for a year. Can Rhys convince her to give him a chance to prove his worth as a mate, or will Merri demand she be taken home immediately? Only Santa knows what the future will bring.

Dasher’s Fated Mate once again takes us back to North Pole City where Santa’s lead reindeer shifter and head of security finds his fated mate… delivered right to him on this Christmas Eve.

Rhys had that funny feeling that something different was going to happen this Christmas Eve.  He wasn’t sure what, but that sense of extra magical possibilities was definitely in the air since he wasn’t the only one who sensed it.  Little did he know then that by the time the team and Santa had returned home after their Christmas Eve flight there would be one completely ticked off human waiting in his room… who just happened to be his fated mate.  Now all he had to do was convince her to stay.

The second of the Arctic Shifters series is lighthearted, funny and sexy.  A touch of Christmas magic all wrapped up in a short visit.  We get the chance to touch base with Arian and Charli from the first story as well.  It’s extra special to meet up with old friends again.

Looking for a short, fun story to put you in the Christmas mood?  Then this one fits perfectly.  Enjoy.