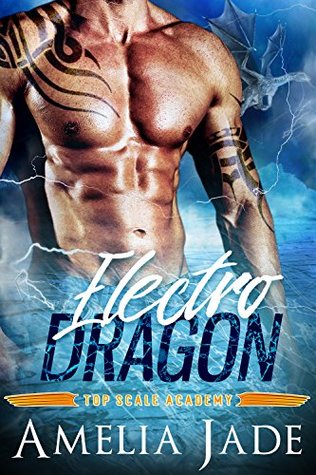 Dragon shifter Dominick Carunno couldn’t take his eyes off her from the moment he set foot in Top Scale Academy. She was completely perfect, and completely off-limits. But lightning can strike anywhere, and when passion overrules common sense, things begin to spiral out of control. That was three months ago, and she hasn’t spoken to him since. Now he finds himself in jeopardy of being expelled.

Rhynne Nova, instructor at Top Scale, is in a bind. Her parents have decided it’s time for her to marry, and have produced the perfect suitor. Unfortunately, not only is he not the dragon she secretly longs for, but he’s a pompous jerk who won’t take no for an answer. Caught between love and duty, Rhynne isn’t sure which way to turn. A sudden onset of morning sickness doesn’t make it any easier.

Can she bring herself to tell Dominick and her parents the truth, or will her fear of change prevent the two fated mates from coming together for good?

Titles in the Top Scale Academy series include:  Frost Dragon – Fire Dragon – Electro Dragon — connecting series Dragons of Cadia and Base Camp Bears continue the overlying story line behind all these series.

Dominick and Rhynne’s story was the most heart wrenching and emotionally frustrating of this series for me.  There were clues in the previous stories about the feelings between this couple, and I wasn’t a bit surprised that they had had a one night stand.  What did surprise me was Rhynne.  She is so brave, strong and determined to have achieved her Guardian status and an instructor at the Top Scale Academy at her age.  Yet she cannot or will not stand up to her social status, interfering mother … at all.  The way Rhynne treated Dom after their encounter was… disappointing.  I’d thought she was better than that, even under pressure.  She’s a Guardian darn it, she shouldn’t have had to take to such childish actions toward Dom.  I know – it sounds like I didn’t like Dom and Rhynne together, but I honestly did.  Her inability for the majority of the story to stand beside the man she instinctively felt was her mate, and constantly give in to the pressure from her mother was… yes, frustrating.

Add to the mix a delegate from Fenris, Garviel, a wolf shifter, a Ward and his so called “body guards”… all up to absolutely no good.  Rhynne’s mother is doing everything in her power to push these two together, uncaring that Rhynne loathes this man on sight.  There will be truths told, damage done, fights break out and long lasting events take place before this situation all plays out.

I enjoyed Electro Dragon very much, even though it was an emotional roller coaster journey for me.  In the end, Rhynne’s powerful father really stood up for her – I really liked that man.  Dom will face the deepest despair known to man or dragon in this story.  He will fight battles not only with enemies, but with himself as well.  The action is fast paced, the story line moved a bit further and the next series is perfectly set up for us to move into.

If you need a villain to absolutely loathe… let me introduce you to Garviel.  I’d definitely recommend this story and this series to any Shifter Romance reader.  A solid story, a sexy couple, tensions galore and life changing decisions to be made.  Absolutely loved this series, and I cannot wait to get started on Dragons of Cadia.