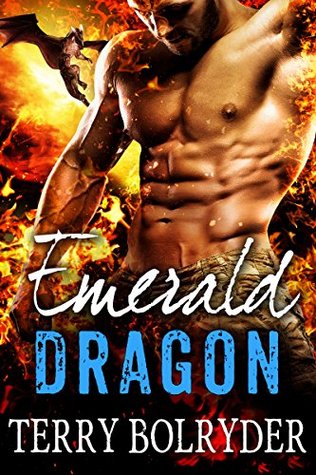 After centuries of searching, the impossible has finally happened: Aegis, the emerald Dragon, has found his long-lost mate. The only problem? She’s a captive of the dark forces he’s allied himself with in order to meet his own selfish ends. But what they don’t know is that Aegis knows how to be a hero, it just takes the right motivation. Like saving the only person that has ever mattered to him.

The Opal dragon has been a prisoner for far too long, full of regrets and memories she doesn’t want to have. Then her knight in shining armor finally arrives in the shape of her childhood friend and the only man she’s ever been attracted to. Aegis. The same Aegis that happens to working openly for the side of evil. But in a sharp turn of events, Aegis rescues her and seeks out the other awakened dragons, showing that maybe even the baddest of boys can have a change of heart.

And despite a very rocky start with their newfound allies, for the first time ever, the two best friends are given a second chance at discovering love. But even though the attraction between them is hotter than dragon fire, it will take more than that to change the unruly emerald dragon. And time is quickly running out, because it’s clear the enemies of the awakened dragons are gearing up for the ultimate showdown.

At the ending of Amethyst Dragon, Aegis came to see Dom to ask the dragon two questions.  Was it true that he could speak to dead people?  And had Opal ever come to him in death?  We’d had glimpses of the Emerald Dragon in every story of this series.  Over time it became apparent that perhaps he wasn’t the absolute bad guy that we might have thought him to be… something was changing in him and now it’s time for Aegis’ story to be told.  And what an amazing story it is.

Although Aegis has done some terrible things, he’s also done some pretty heroic things… for a villain.  Aegis is such an interesting character, for he truly was formed from his past.  A past that included betrayals from those that should have loved and protected him from a very young age – they did not.  There has only ever been one person he could depend on, Opal.  Even though she was treated badly by her family as well, at least they’d had each other, until Aegis’ way of protecting Opal became more than she could stand.  Years passed, and Aegis believed Opal lost to him – until he discovered exactly where she had been all those years apart.  And the horror of that discovery perhaps pushed him a bit deeper into his overbearing protection mode.

The Emerald Dragon brings with it redemption, understanding, perhaps a love and mate for a lifetime… and a realization that all is not always what we see, sometimes we need to experience things from another’s viewpoint to truly understand their actions.  If you’ve followed the Awakened Dragons series from the start, then this story is one that you truly need to read for yourself.  No other’s opinion should color what you will discover about all of our dragons from this series.

The final story in this series brings closure, answers and discoveries – as well as the perfect segue way into the spin-off series that is now available starting with Steel from the Rent-A-Dragon series.  What I am willing to say is that while at times Aegis was a royal pain in the butt, he also has his own rules, his own reasons for why he acts as he does.  By the ending of this story I was totally in love with this bad boy dragon and envious of the love of his life, Opal.  Together their future stretches out before them – and perhaps, occasionally they’ll let us in on their adventures.

I highly recommend this story and the entire series.  You’ll fall in love with dragons and have the adventures you’ve always craved with them and their mates.