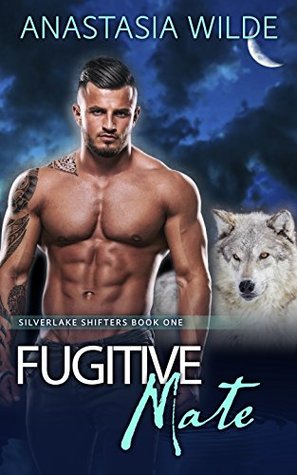 I love finding authors, stories, characters who I almost immediately connect with.  The Silverlake Shifters didn’t take long at all before this entire pack captured my attention and my heart.  Each member, even if in this first story their parts are small, stands out as a character I’d like to get to know better, to understand what made them as they are presented in this first story.  I have to admit that I don’t always find that in a new to me author.  Fortunately for me, I believe I’ve found an author that I feel I’ll be following their works for quite a while.

So what makes Fugitive Mate stand out like that for me?  I can answer that in two words: the story.  From the first page we are caught up in the danger that Emma is facing.  She’s alone, on the run but she’s determined, scared but doing the right thing anyways and figuring out exactly how to do what’s right and stay alive.  She’ll use whatever comes to hand, there may be regrets but this is life or death… and she’s not ready to die.  I liked Emma.  I admired her spunk, her feisty attitude and her strengths, some that she doesn’t even know she has yet.

Jace’s frustration, determination and yes, his fears for his pack come across very clearly.  This is an alpha who has fought hard to gain the territory for his pack, to make a home for them all – and he’s facing losing everything if he cannot find his mate in three short months.  So why on earth did his wolf perk up at the obvious danger in high heels sashaying into the bar that night.  She was trouble, but his kind of trouble… and she was human.  Why did his wolf have to pick a human to go all “I want her” over was beyond him.  It didn’t take long for Jace to discover that the lady wasn’t only trouble walking, she was in some serious trouble and that darned wolf insisted that they help.

In Fugitive Mate you’ll find danger, sexy times, a villain to loathe, interesting secondary characters, and a strengthening bond not only between Emma and Jace, but with the entire pack.  The action is face paced and the steamy moments fall in places where they make sense.  The lore of this world is interesting and not too far different from what Shifter Romance readers would expect.  There are a couple of fun and intriguing twists, one that I should have seen coming but didn’t and that always amuses me when I miss something… odd I know.  I enjoyed my time in this world and am heading out to download the next story.  I believe this is a story that any Shifter Romance reader would enjoy.  Give it a try, I think you’ll enjoy yourself.