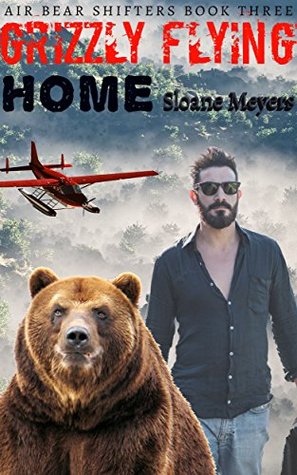 Photographer Emily Wellman feels lonely, isolated, and hopeless. After losing all of her friends and finding herself unable to escape the emotional pull of an abusive boyfriend, she’s starting to believe that she’ll never be truly happy again. But when her path crosses that of the kindest, most handsome man she’s ever met, she begins to realize she deserves better. Determined to turn her life around, she makes plans to move to Alaska, far away from the ashes of a life she has left in California. When that handsome new friend of hers just so happens to be on his way to Alaska as well, sparks start to fly. But will those sparks be enough to ignite Emily’s broken, cold heart?

Grizzly shifter Chance Ayers has spent the last two years avoiding his hometown in Alaska. He’s had a good run in California, serving as the pilot for a group of fearless smokejumpers. But he knows it’s time to go home. His only regret is that he has to leave behind the beautiful woman he’s just met. Emily Wellman captured his heart from the very first moment her eyes met his, but Chance didn’t think he had a shot at being with her. She already had a boyfriend, even if that boyfriend was an abusive scumbag. And he doubted she would want to leave her home state of California to move to frigid Alaska. So Chance can’t help but think that destiny is at work when he discovers that the newly single Emily just so happens to be heading north at the same time as him. The only problem is that she doesn’t know yet that he’s a shifter, and he’s not sure she’s going to want to stick around when she finds out…

Will Emily be able to trust enough to give love another try? And can Chance find the courage to show Emily who he really is? Find out in this steamy bear shifter romance.

Read on for my thoughts on Grizzly Flying Home.

Chance has known for some time now that it’s time to go home.  He’s just been putting off that final declaration to the smokejumpers he’s been piloting for over the past two years.  This has been more than a job, it’s been a life saving time where he made good, life long friends and got his head on straight about events back home.  His only real regret will be walking away from the beautiful woman he is so drawn to.  Emily.  She needs to get away from that scumbag of a boyfriend who he suspects is abusing her – but until she is really ready to put him behind her, there is little that Chance can do except be a friend.

Slowly Emily’s world shrunk down to just her and her boyfriend.  She no longer contacts her friends.  The work she loved is dwindling down to nothing.  When a handsome stranger stepped in between Emily and her boyfriend on one of his tirades, she got that first glimpse of how things should be between a couple, not how they were for her.  Chance offered friendship, and in his calming way spoke about his home in Alaska with such beautiful descriptions that a plan began to emerge in Emily’s mind.  A frightening plan.  One that she no longer was certain she was brave enough to risk – but her eyes had been opened to the reality of her situation.  If she didn’t leave California and rebuild her life somewhere else she would most likely become another domestic violence statistic.  And she finally believed that she deserved better than that fate.  Gathering the bare threads of her courage she took the jump that would lead to a far better life.

Grizzly Flying Home was a wonderful wrap up story for the Air Bears Shifters series.  Walking away or running away from an abusive relationship is never easy.  Many victims of domestic violence never make that choice, and often lose their lives because they could not see how to get away.  I did not see Emily as a weak woman, instead I saw her as a strong survivor.  She had been a vibrant, successful woman before the relationship with the ex-boyfriend.  Slowly, methodically friends, resources, cash, and choices are taken away by an abuser until there is nothing left for a victim to turn to but him.  This is where Emily was when she met Chance – for her to grab hold of that dream, to take the risk of leaving was a very brave thing to do.

Chance also has had time to grow during his time away from home.  When he realized that Emily would be coming to Alaska to start over, taking the risk on a new photographic endeavor and leaving her abusive ex-boyfriend far behind – Chance dared to hope that this was the brand new start to their shared future.  Sure, she had no clue he was a shifter or that his bear had already chosen her as their mate – but right then, at that moment he saw his future and he wasn’t alone anymore.

I enjoyed Grizzly Flying Home very much – and if two people ever deserved a happily ever after it was Chance and Emily.  I’m glad I got to share in their journey.

If you enjoy Shifter Romance, then this story and series should be on your reading radar.  Solid story lines, engaging characters and just enough danger and suspense to keep you focused on these amazing shifters and their mates.  Enjoy.