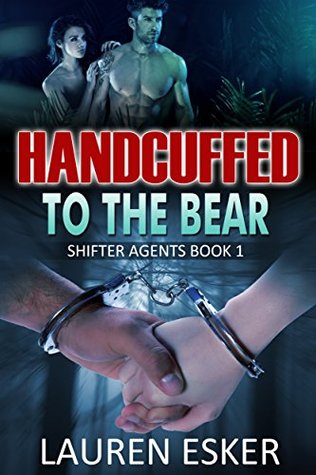 Handcuffed together and hunted, they must rely on each other to survive!

Bear shifter and ex-mercenary Jack Ross hasn’t always been one of the good guys, but now he’s an agent of the Shifter Crimes Bureau, chasing a pride of lion shifters who hunt other shifters in the Canadian wilderness. When he steps in to save their beautiful victim, he ends up in hot water right alongside her. Jack’s spent his life avoiding emotional entanglements, but this time he’s literally handcuffed to the woman whose touch sets him on fire …

Curvy lynx shifter Casey McClaren isn’t just a victim. She’s on an undercover mission of her own, with no training or backup, trying to find out who killed her best friend. But everything goes wrong, and she finds herself trapped on a remote island, handcuffed to the sexiest bear shifter she’s ever seen. Casey can tell by the scars and tattoos that he’s exactly the kind of man she shouldn’t let herself love. But she can’t resist the way he makes her heart pound …

Now the strangers turned partners are on the run in the wilderness, struggling to survive against their pursuers — and fighting the sizzling attraction growing between them. Both of them have spent their lives relying only on themselves, but now these two loners have run headlong into a passion they can’t deny.

This is a standalone, full-length paranormal romance novel, the first in a series about the agents of the Shifter Crimes Bureau.

Titles in this series include:  Handcuffed To The Bear,  Guard Wolf,  Dragon’s Luck

Read on for my thoughts on Handcuffed To The Bear

This is one of those times when you truly, honestly cannot go judging a book by it’s cover or it’s title… there is no kink here folks.  What you will find is a compelling story that is just as much thriller as it is shifter based.  And it will draw you in from the opening page, as for the moment you are just as much in the dark as these two strangers – naked strangers – who are waking up to discover they are handcuffed to each other, on the beach of an uninhabited island full of forests and mountains and no help in sight.  They have only their wits, experience and pure survival mode thinking to try to get out of this alive.  And their chances are not very good.  This island belongs to a power crazy, rich lion shifter pride.  Jack and Casey are the prey, the totally for sport, hunted prey of people who have gotten away with this countless times before.

The cover description tells you the basics of what you need to know before starting this story.  The only thing I would add to that is that this story is told on two fronts.  Jack and Casey’s experiences at simply trying to survive.  And Jack’s friends and fellow agents who are trying to find Jack, knowing full well just how dangerous his current assignment is.  This two fold story line helps to build the tensions in the story, as well as introducing us to characters who will matter in this series.  Jack and Avery have a unique friendship, and the wolf shifter will do everything in his power to find Jack and bring him home.  We’ll also meet many unique shifter agents on the “home” front of the story.  All I can say is.. fascinating and looking forward to their stories.

I believe this is a story best read, not talked about.  Oh, I could go on and on but that would spoil this one for you.. and I don’t do that willingly.  Jack and Casey’s story is a romantic thriller in shifter form.  Yes, there is an attraction between them, but honestly… they’re just trying to survive, anything beyond that simply has to wait.  And it works so well, soon they (and you) forget about the naked part other than to realize just how much more they’re being injured by their environment.  It’s not sexy running naked for your life through brambles and yellow jacket nests.

I would highly recommend Handcuffed To The Bear for any reader who loves a thrilling story, engaging characters and one heck of a story line.  I’ve discovered a new to me author who I plan to do some catching up on – as well as continue with this series.  I would say this one is worth the risk on a not your typical shifter romance story.  Like me, you may find a new author to get your Shifter fix from.  *grin*