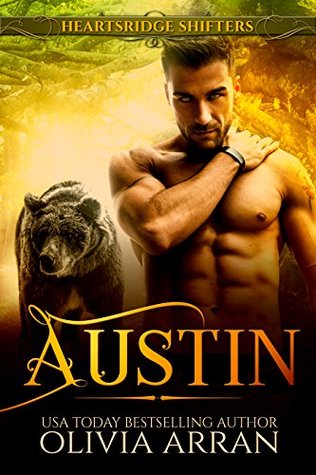 Six years ago, the Registration Act forced shifters out into the open and the world changed. Towns were created to provide a safe haven for those shifters who chose to follow the law, and those who didn’t were declared rogue.

Heartsridge is one of the few shifter towns in existence, guarded and protected by special teams of bears and wolves. Their job: to protect the right for shifters to live and love, and for the space to run free as nature intended. Because not all humans found the truth easy to accept–that they’re no longer the dominant species. Tourism keeps the town thriving, humans able to visit and stay for a week, but then they have to leave.

As the Alpha of Bear Team South-One, it’s Austin Ford’s job to secure the perimeter of the town from possible threats and make sure the visiting humans follow the rules. No exceptions, and that includes the beautiful, curvy human woman he finds trespassing in his forest. Defiant and frustratingly stubborn, everything about the gorgeous human calls to the bear inside him. Before he’s even had chance to snarl, she’s got the furry oaf of a bear wrapped around her little finger, leaving the man confused and trying to catch up. But he has his suspicions. He’s pretty sure he’s just met his fated mate.

Unlike the other tourists, Leona Kelly isn’t visiting Heartsridge to snag a shifter. She’s here to find her missing sister. A woman on a mission, she has no interest in shifters, no matter how devastatingly attractive they might be. Or he might be. Austin. The big, burly bear shifter who’d thrown her over his shoulder and hauled her out of the forest. He says he wants to help, but can she trust him? Then a shocking discovery changes everything. Leona no longer wants to leave, but she’s not allowed to stay. Austin is the only one she can turn to for help.

I have the feeling that Heartsridge Shifters: Austin is merely the beginning of a fantastic series.  The world building is subtle, we discover the lore of this world and the vital information as part of conversations not necessarily as information dumps (which I greatly appreciate).  The cast of characters is wide and varied – and I already have some favorite secondary characters to watch for as the series develops.

Leona is searching for her missing sister.  Harper had come to this shifter town for a relaxing time and to take some photos of the surrounding forests.  When she didn’t return home when expected Leona began to get worried.  She gathered up her courage and set out to find her sister.  And no one was going to get in her way.  Especially not some sexy bear shifter who stole her heart at first glance.

Austin was aware of the pretty little human but he never did the flirt thing with visitors.  Yeah, he wanted to find his mate, but he didn’t expect to find her on a vacation to Heartsridge.  As Alpha of his security team that helps keep his town safe from rogues, intruders and the foolish, Austin had enough on his plate..  So he was surprised to find the human off in the woods in a completely restricted area.  Oh, she was feisty, stubborn and not a little scared – but he also soon discovered that she was also his mate.  Go figure.  Now life was about to get complicated.  As he learned more about her search for her sister, Austin was determined to help her in any way he could.  Something wasn’t right but they’d get to the bottom of it all.  But what to do about the mate part.  She was human, he really wanted his mate to love him for himself not for the fact that he’s a shifter… fated mate, yeah he got that, but he wanted it to be her human’s heart to made the choice to love him.  Hopefully he hasn’t waited to long to tell her exactly how he feels about her.

I really enjoyed Austin and Leona’s romance.  Of course there is drama, danger, sexy times and getting to know a whole new group of supporting characters.  That’s all part of starting a new series.  This story draws you in, and before you know it you’re deep in their lives and enjoying every second.  There were several laugh out loud moments, a few soft smiles at a bear’s idea of romance and definitely heart pounding sexy times.  It’s very tempting to say too much so I’ll simply say that I’d highly recommend this story to any Paranormal Romance or Shifter Romance reader.  The story is engaging, believable and emotional.  I’m about to go download the next story in this series.  I really think Ms Arran has a huge hit on her hands with South-One Bears – and I certainly hope for a lot more stories to be told about these characters.