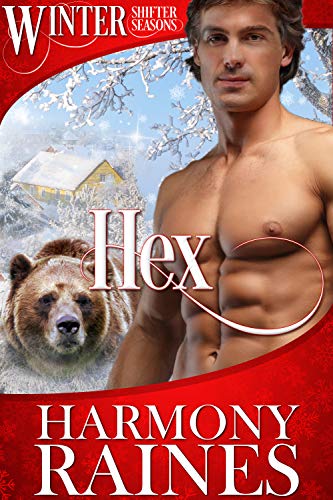 Is he truly cursed? Could fate be that cruel?

Hex by name and hexed by nature. Cursed to dream of his mate dying night after night. To feel the cold water fill his lungs and force the last breath from his body. Just as one day his mate would die in the ice-cold water of the creek.

Perhaps it was a good thing that Hex had never met her. If his mate never entered his life, she wouldn’t suffer the cruel fate he’d relived over and over again.

Then he meets Martha, a cougar from Cougar Ridge and he knows he must see his dream as a blessing, not a curse. What if the dream was given to him as a gift so that he can save her?

Martha has returned to Cougar Ridge to care for her mom who is sick. As a forty-something cougar shifter who longed for a mate and children, she’d put all her energy into forging out a successful career in the city. She had almost given up on finding her mate and then fate brings him into her life and into her heart.

But Hex seems standoffish, as if he isn’t ready to commit, even though he is a bear shifter who should share the same need to find his mate and raise a family.

Martha soon finds out Hex has a secret. A secret that has haunted him his whole life.

Is it possible he has foreseen her death? Can they work together to make sure she stays alive so they can live together forever?

Or has Hex got it wrong? Is it really Martha’s death he dreams of, or his own?

This is an adult 18+ story that contains language, possible violence and sexual situations geared to an adult audience.  A silverback seasoned shifters romance.

Titles in the Winter – Shifter Seasons series include – Hex – Beck –

I’ve enjoyed the glimpses of the men who work around and the man who owns the sawmill near Bear Creek, so I was delighted to discover their own spin-off series of which Hex is the first story.  This bear shifter has been carrying around an emotional and mental burden for so many years.  His recurring dream, that feels more like a premonition, has kept him from truly searching for his mate.  In some ways, Hex feels it might be for the best if he never, ever finds her… but fate has different ideas about that.

I fell in love with Hex.  He’s strong yet tender, committed yet cautious, devoted yet afraid for his mate’s life.  It doesn’t help his concerns that Martha really doesn’t seem to believe his concerns.  No, she’s not calling him crazy or brushing it off – but it’s obvious that she does not feel the strength of the dreams or really puts much faith in them becoming a reality in any way at all.  She will do all she can to calm Hex, but really believe him seems unlikely – until it’s almost too late.

I’m enjoying getting a closer look at Cougar Ridge.  The mothers are awesome, the brothers tight-knit, even the brother that is away right now is fondly mentioned.  Hex is very much a character-driven story.  Yes, there is a major event but no bad guys, just fate to deal with this time around.  We’ll run into other known characters, discover a few interesting twists along the away, and have an excellent beginning to another series to enjoy.  I had a blast, and already have Beck downloaded and ready to dive into.  If you love a good Shifter Romance, especially if you enjoy the Bear Bluff/Bear Creek world, then you’ll feel right at home with the Winter –  Shifter Seasons series.