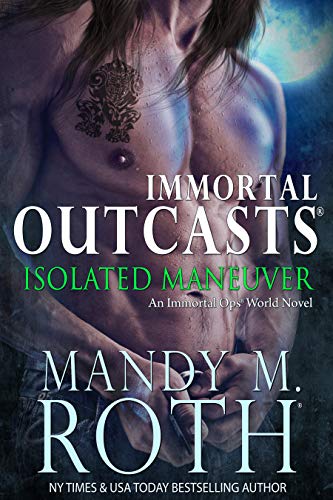 Isolated Maneuver is the third title in the Immortal Outcasts series, part of the connecting series that make up the Immortal Ops World.  Bane is another of the men who consider themselves outcasts for they had been experimented on more than the others with unique and dangerous at times results.  I could not help but feel for Bane as he tries to control his animal side, and in some ways has come to fear allowing himself to shift when he needs to not knowing how his gorilla will react in any situation.  His life is about to change as he meets his mate… and his control will be tested in ways he’s not certain he can control.

The threads that are woven within the connecting Immortal Ops World are very evident in Isolated Maneuver as we meet up with Galiena (Gale) who once worked at Jinx’s brothel in Administrative Control.  With Jinx off with her mate, the club has changed hands, and the one man who makes Galiena’s skin crawl has managed to kidnap her for his own and complete some additional experiments on this natural-born succubus… for a time before she escapes.  Now with her inner self changed, Galiena is seeking out even more sexual energy than ever before and she’s about to run into the one man who can handle every single demand his mate makes… but first, they have to survive.

We meet up once again with two of my favorite, if not craziest secondary characters in this series – Wild Bill and Gus, the silent one who mind speaks when necessary.  These two have escaped from headquarters on a mission to get Bane together with his mate – who he does not believe exists.  And their part in this story is beyond hilarious.  I love these two so much.

The action is fast-paced, the villain vile as possible, and the steaminess is off the charts with Bane and Galiena as they fight the bad guys, trade banter and sass with each other, and fill up the empty parts of each other.  I enjoyed this couple so much.  Each strong and stubborn in their own right together they are an unstoppable force to be reckoned with.  I loved that Galiena was able to calm Bane’s beast on one level and unleash his control on another.  Another amazing addition to this world.

I read this title through my Kindle Unlimited subscription.  Yet, in November of 2020, these series are coming out of KU and will be available on all vendors.