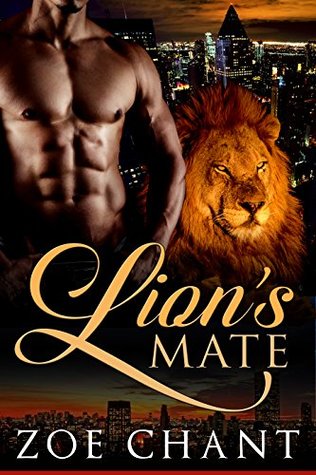 Curvy Shoshanna Ross has had plenty of excitement in her life. Six months ago, she escaped captivity from a nefarious lab. Since then she’s started a business as a private investigator, determined to build up the skills and experience to defend herself if she’s ever in serious danger again. She’s focused exclusively on her job–there’s no time for dating with a life like hers.

CEO lion shifter Max Rowland has a guilty secret. He knows Shoshanna is his mate–but he hasn’t told her, because he believes himself to be responsible for her capture. He’s committed to hunting down anyone who’s performing unethical research on shapeshifters, and that means he can’t let Shoshanna anywhere near him. He won’t expose his mate to danger, even if it means they can never be together.

But when Max is the target of a violent attack, only Shoshanna can help him heal. What happens when Max’s protective instinct is pitted against his mate’s need to stand together against a threat? And can Shoshanna face her fear of the past and come out triumphant?

These days Max is operating on guilt and rage nearly as much as his training for the job he holds as CEO of a global empire.  It was through his indifference to danger that his brother, Seth had walked right into an ambush situation that could have cost him his life.  It was his trust of an old family friend that has started that man’s spiral into embezzlement and setting up a undercover laboratory to capture and test on Shifters for… nefarious reasons.  It was his fear for his  mate, who he’d discovered as a captive in that lab, that kept him from her side to protect her from future harm and perhaps himself from her disgust at his inability to keep her safe.  But, rage and guilt were good working partners – they had taken him to this meeting today where he’d begin the take down of another company intent on experimenting on and harming Shifters.  It’s too bad that Max thinks himself infallible, unable to see the flaws in his grand plans… and someone should have warned him to never, ever drink something that he hadn’t poured for himself.

In the six months since her release from captivity, Shoshanna has rebuilt her life.  With the  more than generous settlement from the parent company of the illegal, unknown experimental lab she’d bought herself a home out in the country where she could shift and roam freely.  And had educated herself as a Private Investigator and set up a company co-owned with her best friend, Kevin, also is a shifter who’d been held in that lab.  You might be tempted to think that life is good for Shoshanna now, but you’d be mistaken.  She’s plagued by nightmares of her past and believing she’ll be alone for the rest of her life, without a mate, for she cannot seem to trust anyone now.

The last thing she expected to see on her front steps after returning from a business trip to Miami was a lion, badly injured and… her mate.  The questions ran through her mind fast and furiously but for now she had to keep her mate alive.  But eventually this man had a lot of explaining to do.

I completely enjoyed Lion’s Mate.  Shoshanna and Max are so good together, they are so much alike that it’s almost scary.  She brings out another side to Max, the stiff, formal CEO falls away and he’s simply Max.  That was a delight to see.  Watching him learn how to share his life and his power as they fought together to take down yet another lab was really perfect for this couple.  Shoshanna is not soft, she’s just as comfortable with a tranquilizer gun as she is making an omelet – she can fit in both worlds, and she’s never, ever going to let her mate put her in bubble wrap.. no, it’s side by side facing life together or it’s nothing.

Although you don’t “have” to have read Lion’s Hunt, the first story in this series, it gives a lot of the background about Max and Shoshanna – plus it’s an excellent story in itself.  If you have the choice and the time, I’d suggest reading them in order to get the most entertainment value from the series.  Either way, Lion’s Mate is an intriguing, intense story with a solid plot, so steamy and hot moments, and a love story that will capture your heart.  I’d highly recommend both stories to any Shifter Romance reader.