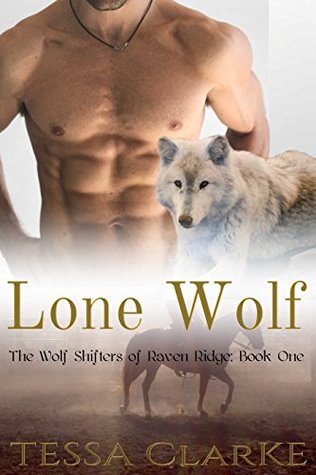 When curvy veterinarian Delany Nichols meets sexy rancher Leif Pierce, sparks fly, but Leif is a wolf shifter with a past, and his brothers have expectations that he’ll share his future mate. Leif’s oldest brother, Wyatt, wants Leif back as part of the pack, for Leif’s own good, but Leif is determined to be a lone wolf and keep Delany all to himself.

When Leif’s secrets catch up with him and threaten to tear he and Delany apart, Leif must confront his demons and his brothers, and convince Delany he can be trusted with her heart

Read on for my thoughts on Lone Wolf.

There is such a sadness to Leif.  And eventually we’ll understand why that sadness exists.  Oh, there are clues throughout the story and by the time of the reveal I had my reasoning  confirmed.  But it’s not my place to tell you, that’s something you’ll discover as you read Lone Wolf.

As Delany made her way out to the call she was hoping it wasn’t a big animal in need.  As the newest veterinarian in the area, her specialty was the companion animals part of the practice – not the cows, bulls, or horses that she was hoping would not be waiting for her at the end of this long country lane.  What she discovered was magnificent – and the creature she was here to tend to was pretty amazing too.  Even before he spoke there was a spark of something between them – Leif captured her attention immediately and she was hard pressed to put her professional face back on.

Leif is disturbed by his reaction to Delany.  Yes, she is a sexy package that he wouldn’t mind getting to know on a much more intimate level – but there was more, when he looked at her – his thoughts were of mates and his alone.  Sadness and excitement were battling within him as he began to get to know this incredible woman who could make him feel again with just a glance.

While physically, sexually things were hot and sexy between them.  It was in other areas where Leif held back.  And when his older brother Wyatt came sniffing around, telling tales he should have kept quiet about that the special feelings between Leif and Delany had its first bit of trouble.  Now it’s up to Leif to let go of the past, hold on tight to his future and convince Delany that he is the only one for her.

Lone Wolf is a novella, so there isn’t a lot of time for back stories or details that might have explained what was happening with Leif.  Yet, it is there if you will simply see it in the short phrases, the looks, the items surrounding them, the names of the ranches…all the clues were there.  The reader simply has to pick up on them.  The story is told from both the hero and the heroine’s view points, and that helps in feeling Delany’s frustration and Leif’s overwhelming sadness.

I enjoyed this story very much.  And now I’m off to find the next story in this series.

*I received an e-ARC of Lone Wolf from the publisher and NetGalley in exchange for an honest review. That does not change what I think of this novel.*

(This title was originally posted on my Keeper Bookshelf blog.  Because I wanted all of my Shifter Romance reviews to be in one spot, this review was brought over to Shifter Haven as well.  Both reviews were written and created by me.)