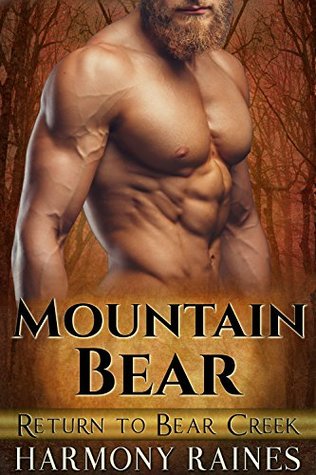 Mountain Bear is one of those stories that have a ring of dealing with real life.  Caroline is ex-Army learning how to live in the civilian world once again.  The man she’d had a crush on for years, even though she knew he wasn’t her mate, died and she is still dealing with the reality of never finding closure.  Never acknowledging her happiness for him that he found his mate, even if it wasn’t her.  Now his death is constantly on her mind, even when she’s drawn the short straw to make a trek up the mountain to speak to a man who now lives in solitude about property that Will and the new branch of the learning center could make very good use of next to their own property.  She has no grand illusions that he’ll allow them the use of the land, but it’s a good excuse to spend some time alone, coming to grips with what has turned into her own reality now.  She expected to find a lone hermit on the mountain – not her mate.

Carter stepped away from the world he once knew, once loved to live off of the land, to in some fashion make amends for his actions years ago.  He is at home here on the mountain.  As much at peace as he can be.  People leave him alone up here, and that’s perfectly fine with him.  Until today when he caught the scent of someone – how could his mate have known to seek him out up here?

Caroline and Carter are two wounded souls who not only need each other because of their mate bond, but also for the understanding that each has for the other’s situation.  They both need closure on their pasts.  Caroline doesn’t have an easy way to do that but she’s trying.  Carter can find closure, but he has to come down off the mountain, take up the reins of his life once more and face what sent him into solitude.

Mountain Bear is a lovely romance of two people learning to deal with their reality.  There are no fights, no fast paced action – only caring, learning to adjust and the people who will help them each on that journey.  We’ll meet people from the first story in this series once again, and possibly be introduced to a few new people who will play a part in Bear Creek one day soon.  I enjoyed this one very much.  Sometimes all I’m looking for is a good love story with some solvable issues – that’s exactly what I found in Carter and Caroline’s story.

If you’re in the  mood for a good shifter love story then I’d highly recommend this one and the rest of the series as well.  You’ll find a loving couple, a supportive town and people you’d love to have as neighbors.  Not everything is solved by having it’s head bashed in, sometimes closure and common sense win the day.

I read this title through mu Kindle Unlimited subscription.