My Heat To Bear by Olivia Arran 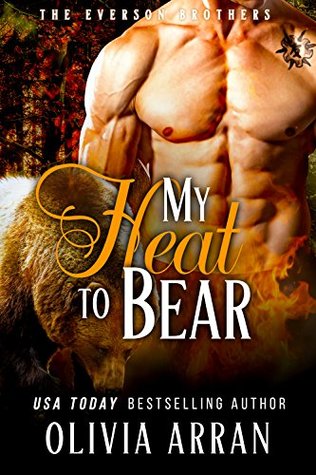 He burns away the memories…
The day Fire Chief Max Everson strolled into Jeanie’s life she knew she had a battle on her hands. Ripped and handsome, he didn’t seem the type to take no for an answer, but she had told him the truth when she said she wasn’t looking for that kind of thing. No flirting or kissing, and most definitely not a fling. She’d been burned before, lost someone she loved, and she wasn’t risking her heart again.

No matter how hot a guy happened to be, or how he could make a woman tremble from a single touch.

They say I have a savior complex…
That’s what Max is telling himself when he looks at Jeanie, with her big brown eyes and curves that have him fighting to draw breath. She needs saving and he’s a sucker for a sad smile. That she works for him is a small complication, but it’ll be fine. He’s not looking for love.

The fact that he’d do anything to make her smile—anything—should have had alarm bells ringing. His bear claiming that she’s his true mate? Big hint. Huge.

Yup. Max’s life is about to get a lot more complicated.

Max, much like his brother Jack, is returning home from the city.  He’s simply had enough.  In his long life he has yet to find his mate, that other half of his soul.  At this rate, he figures the odds are against him ever finding her.  He’s tired, he’s lonely, he’s despondent and he’s come home to let nature take its course.  What’s not helping his mindset is the loss of one of his firefighting crew shortly before he decided to come home.  He and Tia were friends, sometimes lovers with no strings and firefighters in arms.  There was no way to know that the roof beneath their feet would give way or that Tia would be just out of reach.  Her death haunts him daily.  He’s returning home to take up the Fire Chief position in this small town where fires rarely happen.  Perhaps that’s for the best.

Jeannie is accustomed to blending into the background.  She actually prefers life that way.  She’s holding on to a truckload of guilt and doesn’t feel that she deserves anything but the pain and loneliness she feels every single day.  Her life is stirred up when she meets Max under odd circumstances and later discovers he’s the new Fire Chief she’d be working with in her part time firefighter position.  What she didn’t expect was for him to also stir up emotions, longings that she’d denied herself for years in penance.  He’s obviously interested in her, but she’s trying hard to stay out of his reach – and it’s getting more difficult every day.  Especially once he said that love word.

Max has told his family that Jeannie is his mate, yet she’s a human, an emotionally wounded human so she doesn’t know that part of him yet.  When Max goes missing his family asks Jeannie to do the impossible.  On their word to explain later they ask her to search within herself for the soul bond and lead them to Max.  She has no idea what they’re talking about until she suddenly knows exactly where to go.

My Heat To Bear pairs up two wounded people, each feeling guilt over something they had no control over.  Jeannie is slowly letting go of the past, but can she reach for a future with Max.  I liked this couple, they may both be fighting personal pain, but they work their way around and through it to get to each other.

Throughout the series we’ve gotten pieces of brother Ralph and bakery owner Connie.  Their story has sounded heartbreaking from the very start, now with the events in this story can they finally admit what they are to each other.  The answers lie in the next and final story in The Everson Brothers.