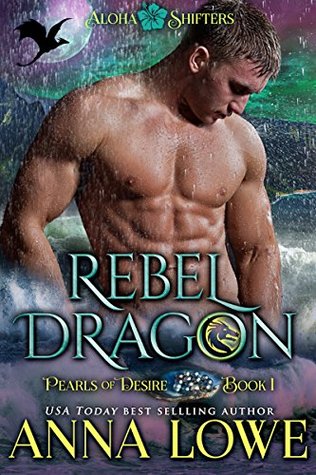 Off to Maui for a relaxing vacation? Surfer Jenna Monroe can only wish. Instead, she’s on the run from a stalker who lusts after her blood. She’d rather comb the beach for lost treasures than venture any deeper into the terrifying world of shapeshifters. There, even the good guys are hard to trust — except for the hot-blooded rebel she can’t get out of her head.

Connor Hoving and his band of Special Forces shifters were planning to leave trouble behind by moving to Maui, but destiny has other ideas. His whole future — and that of his brothers — depends on acing his new job as head of security at an exclusive seaside estate. But Connor can barely get his inner dragon to focus with alluring, off-limits Jenna around. Can this rebel dragon learn to play by the rules when his fated mate’s life is at stake?

The closer Connor and Jenna become, the higher forbidden passions blaze. The more they give in to simmering desire, the more impossible love seems. And the more secrets they uncover, the closer their enemies creep. Vampires and ruthless dragons lurk in the shadows, and it’s impossible to tell whose side fate will take. Only one thing is certain: great heroes don’t get to pick their destinies — only the choices they make.

Pearls of Desire series connects to Jewels of the Heart in many ways – location, recurring characters from the Jewels series so in some ways I’d suggest reading the Jewels of the Heart series first (if you haven’t already)… it’s just a suggestion but I think it would really fill in all the spots of this unique world… plus they’re amazing stories that you shouldn’t miss.  In my opinion, of course.

Oh. My. Word.  And I thought the Aloha Shifters: Jewels of the Heart was amazing… just you wait until you start Rebel Dragon.  Yeah, another completely satisfying visit to the estate (Koa Point) that so reminds me of Magnum P.I and the neighboring property (Koakea Plantation), a run down plantation that several shifters in need of a new direction will be renovating and making their own.  Meet Connor, Tim (Timber), Dell (won’t even mention his full name, he’s embarrassed by it) and Chase.  Chances are that you’re going to fall just as in love with these shifters as I will… and if you’ve enjoyed Jewels of the Heart then I’m pretty sure about this.

There is some slight world building and background establishing as we add new residents to Maui, but easily devoured within dialogue and the story line.  I easily fell into this world once again without a hesitation, that was helped by the appearance or mention of characters I already knew and loved.

Jenna has a connection at the estate she’s heading to on this flight to safety.  She’s suddenly become the target of a stalker, and she’s hoping that being far off of the mainland in Hawaii will stop his annoying, increasingly threatening texts and gifts.  She’ll be staying with her sister and beginning an exciting new job on Maui.  Hopefully the danger will be far behind her.  Connor has left the Special Forces and is heading to Hawaii to meet up with his brothers and their friend to begin a new job and a new type of life.  Fate put him in the seat next to Jenna on the plane, and fate also has shown, at least his dragon, their mate.  The spark is there between them from the beginning, even if they are both hesitant to act on it.  Soon they’ll discover that their lives do seem to be fatefully intertwined in danger and in love.  Jenna is about to make some amazing discoveries that will change how she views the world forever.

Rebel Dragon captured my heart from the first page and still hasn’t let go.  I loved Jenna and Connor together, the discoveries they are about to make will pull you even deeper into the story.  We have some pretty vile villains to deal with, solid friendships to build, old friends to catch up with and new adventures to look forward to.  I had a blast and I highly recommend Rebel Dragon to any Paranormal Romance or Shifter Romance reader who enjoys a really good story, likable characters, nasty bad guys to conquer, steamy moments and a very satisfying reading experience.  This is why I love Shifter Romance, for stories like this one.  Anna Lowe, you’ve done it again and I cannot wait for what comes next.