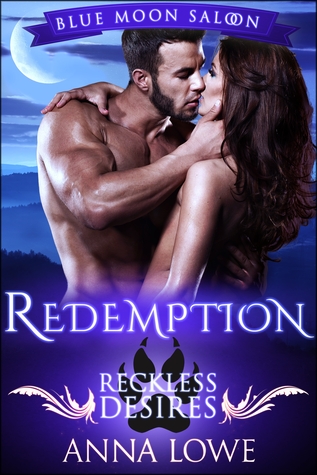 Bear shifter Soren Voss lives and breathes for the new clan he leads as alpha. It’s all he has left after the rogue ambush that murdered the woman he loved — the woman he swears he’ll always love, even if it’s only in his dreams. But the day his dream comes true is also the start of a nightmare, because his destined mate may no longer be his and his alone. Is it fate’s way of torturing him or his last chance at redemption?

Sarah Boone narrowly escaped the inferno that claimed her family and her home. For months now, she’s been on the run with a secret that will soon be impossible to hide. But the clock is ticking, and she needs a place to settle down soon. She never expected to find the love of her life running a funky little place called the Blue Moon Saloon. He’s darker and more dangerous than ever, but somehow more vulnerable, too. Does she have it in her to be the woman her world-weary warrior needs most of all?

Soren’s mind is in the present.  As the Alpha of this small clan-pack of bears and wolves, it’s on his shoulders to help create a safe place for them, provide for them through the bar and now the new addition of the cafe.  His soul is in the past seeking revenge against the rogues and the fanatic mad man who destroyed his clan, the woman he loved and her family and so many others.  His heart is with Sarah.  The human mate who died because of her association with him – and she hadn’t understood why since she didn’t know he was a bear shifter.  And worse, he and his brother were on the East coast when the attack happened – they not only could not save their clan, he could not save his mate.  His heart may still beat, but emotionally he spent his time in dreams and memories of his love, Sarah.

Sarah had survived the fire and was now on the run from those who would kill her on sight.  She had no clue why her family was destroyed or why they wanted her dead.  But she kept on moving toward a town, a place she didn’t know only because it felt like the safe place to head.  She had no idea that she was heading right to Soren.  Exhausted, scared and heavily pregnant, Sarah kept returning to walk along the street in front of the building marked Blue Moon Saloon.  She had no idea why, but it seemed to draw her and she couldn’t leave the area.  When she almost fell in the street, strangers quickly surrounded her and brought her into a building, sat her down and offered her water.  The glass slipped from the man’s hands as he got a good look at her – and then seemed to growl and head out the back door.  Soren.  She’d found the man she loved and was once loved by – only to show up on his doorstep heavy with another man’s child.

I have loved the Blue Moon Saloon series since the prequel.  And throughout we’ve been aware of Soren’s pain at the death of the woman he loved.  So I have to say that Redemption is my favorite of the series – even though I know there is more to come, this one fills so many holes in my emotional attachment to these characters.  And Redemption is a very good title for it covers more than simply Sarah and Soren’s reunion.  It would be very easy to give away spoilers, so I think that I’m going to stop here with this last thought… there is an epic battle that if you’ve followed the series you will not want to miss.

Redemption is an emotional roller coaster of a read.  If you love Shifter Romance, then this series is one that you should have on your reading list – and when you get to the point of reading this story, I think you’ll understand why it is my favorite of the entire series.  I have no hesitation in recommending this story and this series to anyone who loves Shifters or simply a lovely, compelling love story.