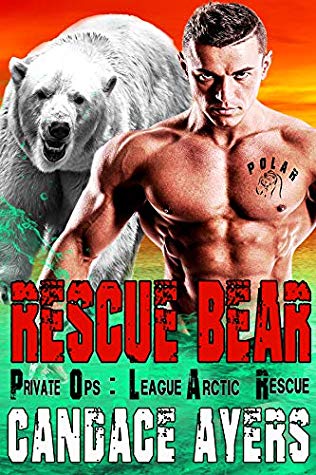 RESCUE BEAR begins the P.O.L.A.R. series with an interesting set of characters and an emotionally charged story for Roman and Megan.  With a cast full of displaced polar bear shifters from Siberia now roasting in the heat of Florida, I think we’re in for an intriguing series.

Megan’s marriage has been in trouble for some time, she knew it, ignored it, but since she’s always kept her head down to avoid the verbal nonsense that spews from her husband’s mouth what happened that day came as a… not surprise, but more of all the pieces falling into place.  If you’re looking for a person to loathe and wish to see karma do a number on then Dylan is your guy.  What a worthless piece of crap.

Since being sent to this small town in Florida, Roman and his fellow task force members have been sweating it out, searching for cold air, and keeping watch for danger as they help out around their new community.  With a full-blown hurricane bearing down on them that help is needed.  Yet, Roman never thought that when he saved a woman moments from death caught up in a riptide that he’d found his mate – or that she was married.

There are two kinds of devastation in RESCUE BEAR.  The damage that the hurricane has done, and the knowledge that Megan is Roman’s mate but she’s with a jerk of a husband, and Megan’s realization of just how Dylan has played her all these years and now her eyes are opened.  But she’s not ready to completely trust in Roman, or his tales of mates, just yet.  Watching them work their way to each other is sexy, emotional and completely satisfying.

(just as an aside, I don’t consider that there is any cheating in this story, Megan was finished with Dylan after what he’d done and is quickly moving on, the official ending of her marriage was only a formality that was quickly handled – I know that cheating matters to some readers, so that’s my opinion)

If you enjoy a sexy, sizzling Shifter Romance with likable (mostly) characters and a couple that is perfect for each other then you’ll want to get in on the beginning of a new series with RESCUE BEAR.