Running To The Pack by Keira Blackwood 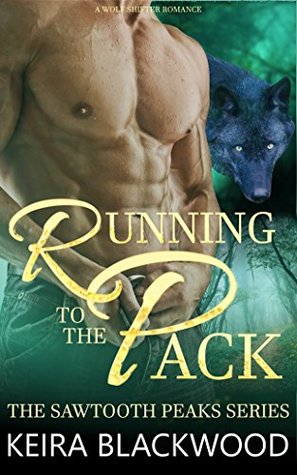 Hailey Archer is on the run. Fleeing from a dangerous stalker, she’s throwing away the life she’s built over the past three years. She could go anywhere, but she’s drawn to the one place she’s always felt safe, her rural hometown of Sawtooth Peaks. She finds refuge with her sister, but Hailey can’t resist visiting her highschool sweetheart. No amount of time away could prepare her for seeing the love of her life again, and for the storm of emotions that come with one look at the strapping, dominant man that he’s become. Finding her strength again proves difficult when the man of her dreams has something to hide.

Burly wolf shifter, Cole Tenbrook, is next in line for alpha. With the impending threat of a rival pack leader, the Sawtooth Peak wolves look to Cole to take a she-wolf mate and claim his rightful position. When the girl he pushed away returns, he struggles to find the strength to keep the stunning woman she’s become at arms length again. His inner wolf growls to mark her as his mate, but to claim a human he would need to forfeit his right to become alpha. How can he protect her when his secret could kill her?

Read on for my thoughts on Running To The Pack.

Hailey had left her hometown about three years ago.  She was so certain that the young man she loved would want her in his life forever.  They loved each other, or at least she had loved Cole.  But he pushed her away and crushed the dreams she had for them.  Hailey couldn’t stand to be in the same town with Cole, knowing he’d never be hers so she left.  That was a mistake.

Today Hailey has returned to Sawtooth Peak with a black eye, a split lip and terror in her heart.  She grabbed the most important things in her small apartment, slipped out of her home and boarded a bus back home to her sister and to the only man she’d ever felt safe with.  Maybe she was crazy but she’d only feel safe again once she saw Cole, even if he didn’t want her anymore.

Cole’s life is stifling him.  Taking over his father’s bar meant hours inside, going over paperwork to learn the business.  He’d much rather be out running through the trees in his wolf.  His mother was also becoming a royal pain in the behind as she pushed him to take over the Alpha position that was left open at his father’s death… and to take a wolf shifter as a mate.  He knew who his mate was and she definitely wasn’t a wolf shifter.  He had sent her away, pushed her hard to leave him behind – it was the most painful thing he’d ever had to do, but she deserved a life better than as his mate.  And he could not take the Alpha position without a shifter mate.  Basically he was backed into a corner and no matter which way he turned – his own happiness was never going to happen.

There are several wolf packs in the area.  And one Alpha is beyond crazy in his need to take over other pack’s territories – no matter who he had to kill to accomplish that.  One of the reasons Cole’s mother pushes him so hard to take a mate is fear of this Alpha, because he could and most likely will try to take over their pack since they have only a temporary leader right now.  So much was on the line waiting for Cole to make a decision, was it any wonder that he escaped from the business as often as he could.

Today, in the bar’s parking lot he caught a scent, a unique smell that he’d not tasted for a very long time.  Hailey.  There she was again, across the street and someone had harmed her.  As he held Hailey in his arms and let her cry out her fears in his strong arms Cole made a decision.  One that would change so much for so many people and shifters.

Running To The Pack is a story full of emotions of all sorts -love, lust, anger, fear, jealousy, envy and pure madness.  Cole and Hailey rediscover or maybe reignite their love for each other might be a better description.  It’s not easy, it’s not smooth – there are dangers along the way, especially Hailey’s stalker.  Their romance is of course sexy, but there is also that second chance to make everything right, no matter the consequences.

Hailey and Cole do get their happy ending.  But the threads of this story will continue throughout the series.  No there are no cliffhangers, but Hailey and Cole’s story is not done and we will meet up with them again in the next story in the series.  I’m making this very plain because sometimes readers (and reviewers) see cliffhangers where there are none, truly.  But there is an underlying story line, and of course it is open to develop and grow in the following books.  That is a series, not a cliffhanger. 🙂

If you love Shifter Romance then I believe you’d enjoy Running To The Pack and the Sawtooth Peak series.  I would definitely recommend this story, and I’ll be downloading the next one shortly.