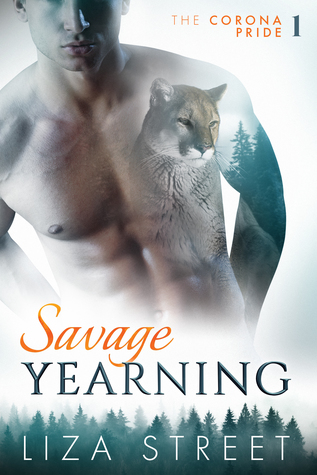 Savage Yearning delivers everything I look for in Shifter Romance, strong characters, an interesting world build, a definable villain(s), and issues that are important to overcome… and, well, the sexy times just have to sizzle.   I found all of that and more in this first story in The Corona Pride series.

It’s obvious from the beginning that Laura and Dristan have a history and a connection that simply will not go away.  It’s also obvious that Laura is fighting a losing battle with herself over her need for Dristan.  There is just enough snark in Laura when we first meet her to show the diverse parts of her personality.  She may be fighting the need, but the feeling that Dristan is hers and only hers won’t slip away as easily as she would like.  When their need and desire for each other rather explodes in their faces something needs to change … and soon.

The world building is smooth, we learn about this pride and their rules slowly through dialogue and reactions.  The introduction of the villains is so smooth you might miss it, and even though I was watching for it I have to admit it was effective.  And exactly what I would expect of these creatures.  Vampires are not sexy nor sparkly in Savage Yearning, they are the vile creatures of old lore, and they make a formidable enemy to these shifters.

Overall, this story is compelling, intriguing and so darned sexy.  Laura is such a strong character in many ways, yet she has her vulnerabilities as well.  She becomes a complete person in this story as she grows, takes charge of her own life while defending the man meant for her, and she was enjoyable to read about.  Dristan is a sexy as sin man who knows who the woman for him is, yet his family’s past within the pride is holding him back from Laura in some ways.  His self-doubts make him a more human character but they do not define him as he is certainly  capable of fighting against pride rule when it’s necessary.  I liked this couple very much, and I admit to hoping to run into them again as the series continues.  It’s always fun to catch a glimpse of past couples, for me it brings the feel of the “group” or pride a step further into believably.

I would definitely recommend Savage Yearning and this entire series to any Paranormal Romance or Shifter Romance reader.  You’ll find a strong story, believable characters, a nasty villain and secondary characters that you’ll both dislike and love while hoping for their own stories to be told.  Give this one a try, I believe you’ll discover a new author to follow – I know I have.