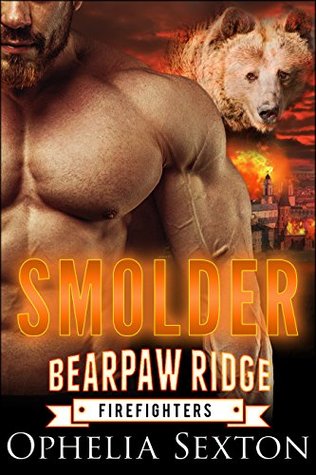 The biggest story of her life could be her last … unless her mate can save her.

Curvy journalist Caitlyn Roberts can’t believe her eyes. She and her boss at a popular paranormal investigations website have just received shocking footage of a local businessman turning into a giant beast! Things go bad in a hurry when the subject of the investigation decides to destroy the evidence…and her.

Caitlyn flees for her life, only to end up stranded in the middle of nowhere when her car goes off the road. Certain she’s about to die, her luck finally takes a turn for the better when she’s rescued by the strongest, sexiest firefighter she’s ever seen.

Bear shifter and small-town attorney Mark Swanson divides his time between running a law office to help his friends and neighbors in small-town Bearpaw Ridge and volunteering as a firefighter. The last thing he expects is for an accident victim to be his fated mate…especially when she turns out to be the reporter behind the news site determined to expose shifters as real.

Despite the risks, Mark and his bear can’t resist getting closer to the sexy reporter they both want to claim. The heat between them is irresistible—but when a shifter hit man shows up, it’s clear that Caitlyn’s got more problems than a wrecked car. Can he and his mate trust each other with their deepest secrets, or will their happy ending be ripped away from them?

Smolder is a tense, fast paced Shifter Romance that puts an interesting situation in play for our family of bear shifters.  What do you do when it turns out that your human fated mate is trying her best to publish a news report that will out shifters everywhere as real and living among humans?

Caitlyn writes for a popular paranormal investigative website, she’s good at her job even if she’s skeptical about some of these creatures she writes about.  A man turning into an animal?  Get real.  Up until she sees the “proof” for herself, and sets out to find out what is real and what is surely make believe.  She has no clue of the danger she’s walking into – or that her mate, the man she’ll spend the rest of her life loving is exactly what she’s investigating, a shifter.

I enjoyed Mark and Caitlyn’s romance.  She’s on the run from more danger than she realizes yet, and he’s just the man to come to her rescue.  There is certainly intense action in this story, and not only the sexy times kind.  There are those that will do anything to stop Caitlyn’s investigation, including murder.  And it’s up to Mark and his family to insure that the bad guys lose, and that Caitlyn and Mark get their fated happy ever after.

I’d recommend this story or this series to any Paranormal Romance or Shifter Romance reader who enjoys a solid story, some intrigue and danger, an interesting secondary cast just waiting for their stories to be told and a likable main couple.